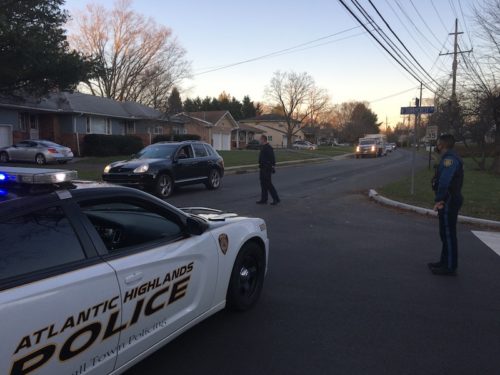 In a chat app, neighbors shared an unconfirmed report of a hostage situation.

The situation began around 3 p.m., with police heavy police activity centered on two locations on Branch Avenue, according to a neighbor who asked not to be identified. One was a house, between Carlile Terrace and South Sunnycrest Drive, and the other, a vehicle in a driveway about six or seven houses to the south.

The neighbor told redbankgreen she saw law enforcers “just tearing that car apart,” and heavily armed police climbing over fences around the rear of a second home.

Her neighbors near that house had been evacuated and were waiting out the situation at Markham Place School, she said, and others on North Sunnycrest Drive were told to evacuate shortly after 5 p.m., she said.

Roads across a wide area of the borough were blocked off by police, no cars allowed in either direction on Branch between White Road and Sycamore Avenue, and the Sunnycrest area also closed.

At 5:48 p.m. the neighbor said she saw signs of police cars beginning to leave the scene.

Posted on December 2, 2020 at 5:45 pm, filed under Crime, Featured, Law & Justice, LITTLE SILVER and tagged Crime, little silvern, nj, police. Bookmark the permalink. Follow any comments here with the RSS feed for this post. Trackbacks are closed, but you can post a comment. Email this story.
PREVIOUS: VIRUS: MURPHY NOTES HOSPITAL TREND NEXT: LITTLE SILVER: CALL PROMPTS ONE ARREST