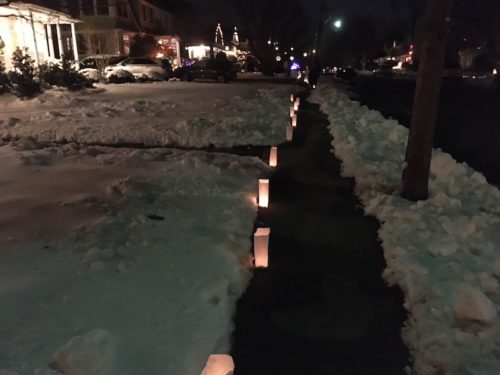 Minus their customary caroling, to minimize the spread of COVID-19, neighbors on South Street in Red Bank went ahead with their annual display of luminaria Friday night.

Monday at 5:02 a.m. marked the solstice, the passage from autumn into winter in the northern hemisphere. This year, by coincidence, December 21 is when the two largest planets in Earth’s solar system, Jupiter and Saturn, will appear to nearly merge in the night sky in a rare phenomenon called a ‘Christmas star,’ according to Astronomy magazine.

A clear sky is needed to see the “great conjunction,” but the outlook for the Greater Red Bank Green is less than ideal, as detailed by the National Weather Service in the extended forecast below. (Photo by John T. Ward.  Click to enlarge.)