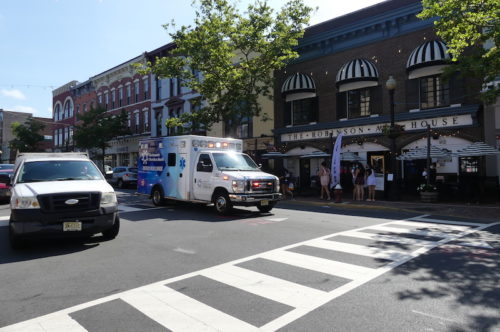 Mayor Pasquale Menna voiced sharp criticism of an earlier version of the new bylaws when they were first brought to the council for approval in early December.

Menna said several of the changes would reduce council and public oversight of the agency. They included a reduction in the size of the agency’s executive board, from 30 members to 26. One of the four seats targeted for elimination was reserved for the council liaison; another was for a borough resident appointed by the council.

But the revisions have now been… re-revised, Councilman Hazim Yassin told the council at its February 3 workshop session.

“Last time they brought their bylaws to us, we weren’t too happy with the some of changes they were asking for,” said Yassin, who serves as liaison to the agency. “But I’m please to report they’ve acquiesced to all the changes we were looking for them to revert.”

Both seats would be retained, he said. Here’s the ordinance containing the changes.

The contract runs through 2023, and will cost the borough $120,000 per year, “essentially the same terms and at the same price” as the contract that expired December 31, Business Administrator Ziad Shehady said at the February 3 session.

Prior to 2013, 911 calls for EMT service had been answered by the borough volunteer First Aid Squad. But because of difficulty in mustering crews for fast response, the borough signed on with MONOC that year to supplement the volunteers.

Five years later, when MONOC proposed a tenfold increase in its annual fee, to $300,000, the borough switched to Hackensack Meridian’s service, then called Alert Ambulance.

Under the pact, Hackensack Meridian will keep an ambulance,  branded as “JFK EMS,” at the former Relief Engine firehouse on Drummond Place.

• Approval of a fourth annual lease of property for a police impound yard.

• Still missing: a revised public comment protocol. One was to have been introduced at the reorganization meeting January 1, but was pulled for revision, Mayor Pasquale Menna said at the time. It has yet to return to the agenda.