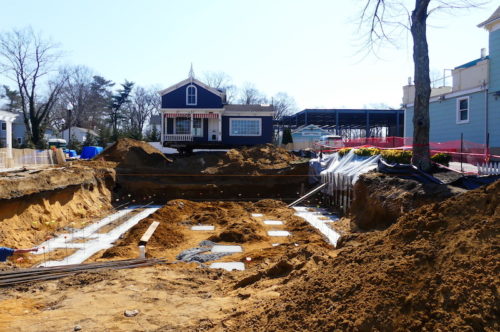 Yet another century-old building in Fair Haven’s historic downtown is up on blocks. 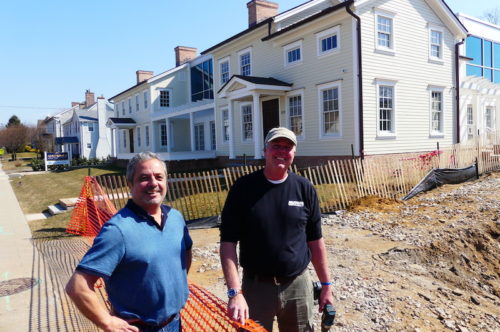 Michel Berger, left, with project manager Scott Maxwell of Abatare Builders outside ForeFront’s  offices, which joined a 150-year-old building with a replica of another. (Photos by John T. Ward. Click to enlarge)

What’s Going On is the final piece of entrepreneur Michel Berger’s vision of a headquarters for his company, ForeFront Corporation.

Dubbed ‘Silicon River,’ the project aims to revive endangered historic structures in the heart of his adopted hometown by repurposing them as hubs of tech creativity, Berger said Thursday.

Berger, a French immigrant, has already remodeled a large Victorian mansion at 800 River Road, where he based his business. He expanded it when he relocated a 150-year-old building, at 810 River Road, and joined it with another he replicated at 812-814 River Road, in a project completed in 2018.

The last element is 804 River, a circa-1870s wooden structure that served as home to Threads needlepoint store for 25 years before it closed in 2017. (New owners acquired the inventory and opened Threads Too across the street at the same time.)

Project manager Scott Maxwell recently elevated and moved the building to the rear of the lot so he can construct a new foundation and basement while providing handicapped access.

When completed, the re-sited building will look much as it has since the 1870s, with the same color scheme on the clapboard – but minus the River Road driveway and curb cut, which makes Monmouth County traffic planners happy, Berger said.

Inside, the building will become an open-plan “hangout” for ForeFront employees.

The work of the company’s business analysts, solutions architects, web developers and more is all about creativity, Berger said. “So you need to have that space,” he said. “If it is a fun environment, it’s even easier than to be stuck in an office trying to figure out all this stuff.”

Less fun is the “distraction” of navigating historic preservation requirements and construction plans, and so he’s hanging up his hardhat as a developer when the project is done, Berger told redbankgreen. “But I call these buildings the old ladies, so I’m very happy that somebody is taking care of them.”

Maxwell said he expects to complete the work by mid-summer, he said. For more about the project, check out redbankgreen’s coverage here.