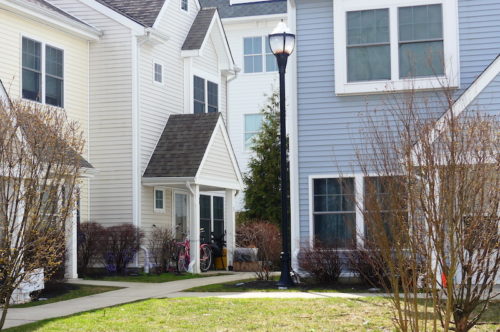 A homeowner at Cedar Crossing owes years worth of unpaid fees, the condo association says. (Photo by John T. Ward. Click to enlarge.)

Housing officials in Red Bank are preparing legal action against a Cedar Crossing homeowner they say has both illegally sublet her condo and skipped years of fee payments.

Trying to track down the unit owner about the matter has been frustrating, Red Bank Housing Authority Executive Director Bill Snyder told board commissioners at its monthly meeting, conducted via Zoom last Wednesday.

The authority, manager of the 90 rental units at Montgomery Terrace on Tilton Avenue and Evergreen Terrace on Leighton Avenue, also manages the decade-old Cedar Crossings condo complex, which was developed by a separate agency, the nonprofit Red Bank Affordable Housing Corporation, to give qualified buyers a foothold on home ownership.

As a condition of ownership, buyers of the 36 townhouse units on Cedar Street agree not to sublet their units.

Snyder said the condominium association has engaged an attorney to begin possible foreclosure against a unit owner “who allegedly has been subletting her unit for years, and owes in excess of $10,000 in homeowner fees. And the homeowner association’s not very happy about it.”

The homeowner fees are $150 per unit per month, he said. That suggests the owner hasn’t paid the fees in more than five and half years.

“When we have homeowners who don’t pay the fees, there’s some things that just can’t get done, such as landscaping,” Snyder said.

“Bill, excuse me, but it is the same person who’s renting it out and not paying?” asked board member J.P. Nicolaides, sounding astonished. Snyder confirmed it was.

“Why is it allowed to go on for so long?” asked board member Alpha Reynolds Lewis, who also serves on the RBAHC board.

“We’ve been sending letters. She just ignores us,” Snyder said. “That’s why we had to get a lawyer.

“The time I spent on this to find this woman – she doesn’t live here anymore, she lives in Cherry Hill,” Snyder continued. “And I found her through Facebook and the gym that she was going to. And when we finally got her address, she moved to another address. It’s a lot of skullduggery.”

Snyder did not identify the homeowner by name, but correspondence provided to the board named her as Monica P. Palacios.

redbankgreen could not locate Palacios for comment. No one answered the door at her unit Friday morning.

Monmouth County records show Palacios bought the townhouse in late 2012 for $165,500. The deed language indicates that the remedies available to the homeowners association include foreclosure and seizing illegal rent revenue.

Snyder said he was reporting the matter to the RBHA board to clarify that, contrary to a rumor, he had initiated a foreclosure action. In fact, he said, he wanted nothing to do with the matter, which he said fell outside his responsibilities.

“I’m taking direction from the homeowner association,” he said, adding that he had advised it not pursue a foreclosure because of what he believes will create more problems for the association.

Instead, he said, the association should “try to collect these fees,” possibly through legal action alleging fraud, he said.

A lien has been obtained, according to correspondence between the two housing organizations.

Reverend Terence Porter of Pilgrim Baptist Church, who serves as both executive director and president of the RBAHC’s board, declined comment, referring questions to the housing authority.