RED BANK: THE YARD, THROUGH PINHOLES 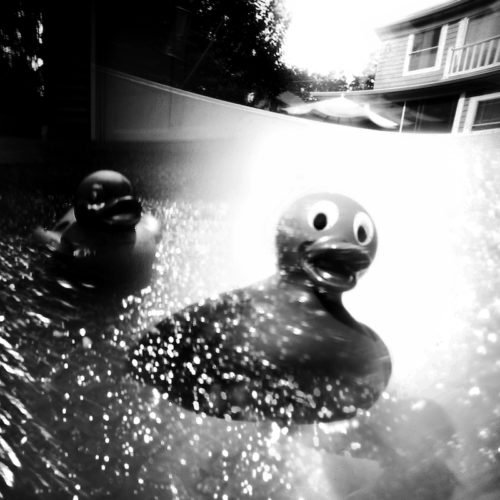 A pinhole camera image from Jay Sullivan’s ‘Out of the Box’ exhibit at Red Bank Frameworks. (Jay Sullivan photo. Click to enlarge.)

After completing a project about his father that took a heavy emotional toll, Red Bank photographer Jay Sullivan “decided to do something lighter” for his next series of pictures.

“Something lighter” turned out to be images from his backyard taken over the next seven years with a camera made from a hexagonal hatbox. 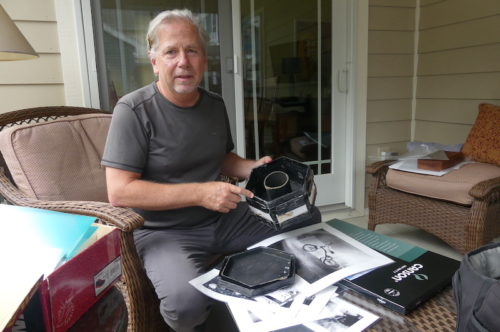 Jay Sullivan with his pinhole camera, made from a hatbox. Below, another image from the exhibit. (Photo above by John T. Ward.) 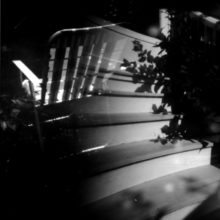 A 63-year-old former corporate documentary maker who’s also trained as a life coach, Sullivan’s last gallery project involved images that reminded him of his late father, who experienced a long descent into mental illness and homelessness.

“Photography is a great tool for me to work through memories, and that’s how therapy works, narrative therapy,” Sullivan told redbankgreen last week. He describes his work as “falling at the intersection of memory, creative process, and self-development.”

His latest project goes on display Wednesday as a series titled ‘Out of the Box’ at Red Bank Frameworks.

The series was defined by two unbreakable parameters, Sullivan said: the photos had to be made with his duct-taped, six-lensed pinhole camera, and had to be taken in his backyard, on East Bergen Place.

The idea was to do something fun, random and exploratory, he said.

But after after about two years, he said, he began to feel constrained by the square images the camera was producing. So he inserted a cylinder he could wrap photographic paper around and began making panoramic images with multiple subjects and vantage points at once.

The technique produces negatives, which Sullivan converted to positives using a scanner and Photoshop.

“The ones that gave me the most happiness, I made bigger,” he said. Though someone said of a photo of a duck in a wading pool (shown above) that “it scares the hell out of him, I thought it was happy,” Sullivan said.

Out of some 300 prints, he winnowed 35 for the exhibit, which runs from Wednesday through September 15, and may be viewed Tuesdays through Saturdays during shop hours.

In lieu of a formal opening reception, Sullivan will be present for four hours a day (1 to 5 p.m.) for the show’s first four days for one-on-one or small-group discussions about “photographic, creative, and mind-made boxes.”

It’s an idea adapted from his thesis presentation, given upon completion of his MFA degree from TransArt Institute in Berlin, Sullivan said. Rather than stand at a podium and discuss slides, he opted to sit and talk with the audience members one-on-one, about his images or anything else they chose.

“People started calling them ‘readings,'” he said. “When it was over, there were still 10 people standing in line waiting.”

Reservations are recommended for the conversations; click here to schedule one.

Posted on July 26, 2021 at 12:00 pm, filed under Art, Featured, Photos, RED BANK and tagged Art, jay sullivan, photography, pinhole photography, red bank. Bookmark the permalink. Follow any comments here with the RSS feed for this post. Trackbacks are closed, but you can post a comment. Email this story.
PREVIOUS: ON THE GREEN: TAX DUE DATES EXTENDED NEXT: RED BANK: SURPLUS KEEPS TAX RATE LEVEL