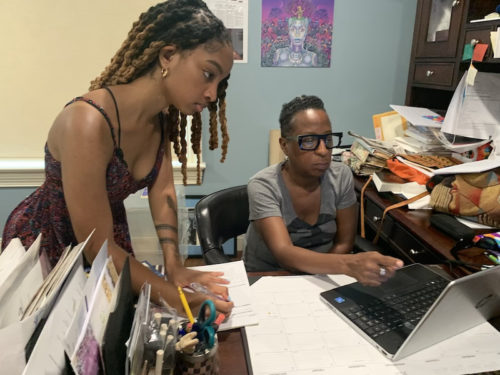 Suubi Mondesir with Fortune Foundation co-chair Gilda Rogers last month. Below, Mondesir, second from right, on a 2016 tour of the Fortune house led by builder Roger Mumford. (Photos by Chris Ern, above, and John T. Ward. Click to enlarge.) 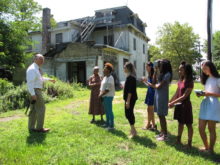 In the summer of 2016, Suubi Mondesir was a rising junior at Red Bank Regional High School when she participated in a tour of a crumbling Red Bank house.

At the time, preservationists envisioned the building on Drs. James Parker Boulevard as a cultural center in honor of its onetime owner, the civil rights journalist T. Thomas Fortune, and Mondesir was present as a participant in the Hugh N. Boyd Journalism Diversity Workshop at Rutgers University.

Flash forward to 2021: The house has been fully restored as the T. Thomas Fortune Cultural Center, and Suubi (pronounced SOO-vee) manages its media outreach efforts as an intern. But it’s not just a job. Her work at the center aligns with a personal passion for social justice, inspired by Fortune’s work in the late 19th and early 20th centuries, she told redbankgreen in an interview last month.

“What he did is what I am hoping to do as well: to inspire people with my writing, and to speak truth to power,” Mondesir said. 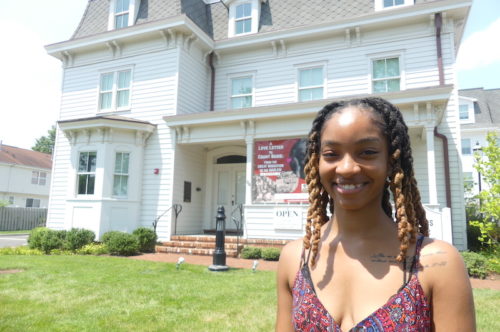 Suubi Mondesir outside the restored Fortune house in July, and speaking at a 2017 events at which she was honored for her work. (Photo above by John T. Ward. Click to enlarge.)

The preservationists saved the house from likely demolition with an invaluable assist from developer Roger Mumford, who won borough permission to build 17 apartments at the rear of  the property in exchange for a full, and free, restoration. The project was completed in 2019.

Mondesir has been involved since early on, helping give voice to the project when the center was still a dream. While still at RBR, she handled media relations, and in 2017, the center honored her for significant contributions to saving the historic home, which is listed on the the National Register of Historic Places.

“Seeing that whole process, and being a part of saving a historical landmark, was great for me because it made me feel like I was doing something that really mattered,” Mondesir said.

The program, which Mondesir now leads, is offered to students from eighth through twelfth grade; they participate in workshops on African-American history, journalism and other topics to become “ambassadors” for the center. Fortune Tellers also lead school tours, and carry what they have learned out to the community through their own creativity in music, writing, art, dance and other forms, Mondesir said.

“The cultural center can only go as far as the young people will take it,” she said.

This summer, Mondesir, who’s now a rising senior at Fairleigh Dickinson University with a double major in communications and government and law, with a concentration in journalism, again serves as the center’s publicist, this time under a paid internship. In that role, she keeps its website updated while contributing to the “Noteworthy,” an online magazine that highlights events, history and exhibits at the center.

The aim of her job, Mondesir said, is “to get people in the door” and to develop a community that can sustain the center’s mission.

Gilda Rogers, a driving force behind the restoration project who now co-chairs the T. Thomas Fortune Foundation, has high praise for Mondesir, whom she has known since she was six years old.

“It warms my heart” to see Mondesir grow with the center, said Rogers. “She’s energetic, curious, and has a lot of great ideas.”

Mondesir credits her mother, Birgit Mondesir, a “firecracker of a woman,” for inspiring her passion for activism and her desire to be heard at a young age.

“She always encouraged me to go out of my comfort zone,” Suubi said. “She definitely had a huge influence on how I use my voice today.”

The center’s namesake, too, inspires her. Born into slavery, Fortune struggled to be heard as a representative of a community that was repressed for so long, and Mondesir follows in his footsteps through her writing, as well as activism in Red Bank and elsewhere, she said.

“How can you not be involved?” she said. If everyone thought their voices didn’t matter, she added, “nothing would get done.”