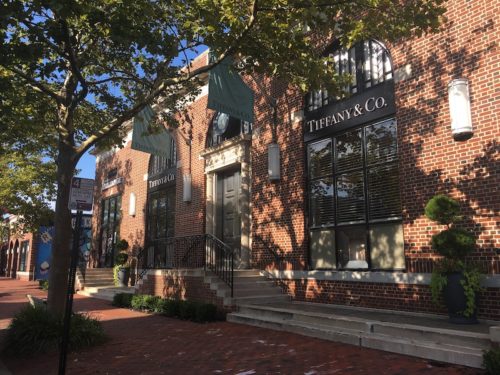 Is Tiffany & Co. vacating its store in downtown Red Bank?

A real estate listing might suggest it is. But the building owner says no… not yet, at least.

The listing says the space is available for lease or purchase, with a “deal deadline” of November 1.

The building is owned by luxury clothier Garmany, located next door. Johnell Garmany, a principal in the clothing store, told redbankgreen Monday morning that he’s just “weighing [his] options” and “taking proper precautions” with the listing.

“Tiffany‘s lease is up next year, and I want to make sure that I have done my due diligence in case they decide not to go forward or if negotiations break down,” Garmany said via text.

Garmany said Tiffany’s sales at the location have been “incredibly strong, especially over the last year and a half,” and the company has “never said they wanted to leave. They actually expressed that they wanted to stay.

“All I can say is that we are in negotiations. My hopes are that they will be with us for a much longer term” he said. If not, “we have already had some real interest from a few national prospects as well as some regional players,” he said.

CBRE senior associate Joe AmecAngelo added, via email: “Tiffany is not closing the store. They simply have not renewed their lease at this time and the negotiations are slow going. This puts the owner in a very tough position (not knowing for certain what the future will bring). Therefore, he must be a responsible owner and consider the worst option. Our hope is that Tiffany & Co. stays and renews their lease.”

Tiffany’s media relations office did not immediately respond to an inquiry.

Tiffany opened the store in November, 2007. Its space, in a building erected as a post office, is flanked by two beauty-industry shops: the Lash Lounge and Cos Bar, each of which occupy about 1,400 square feet.