Jon Stewart serving lunch to construction workers from a food truck at the Count Basie Center for the Arts in 2018. (Photo by John T. Ward. Click to enlarge.)

Political commentator and comedian Jon Stewart is selling one of the two side-by-side riverfront mansions he owns in Red Bank, according to a recent filing. 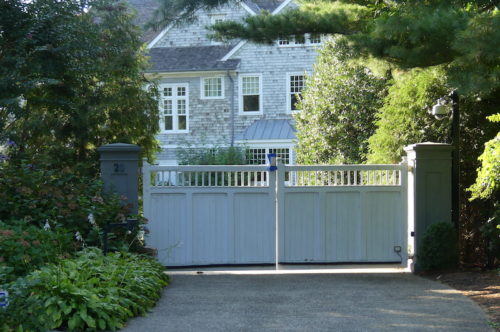 Stewart’s house on Alston Court, above. Below, his homes on Alston, left, and Fisher Place, right, as seen from the Navesink River in 2010. (Photo by John T. Ward. Click to enlarge)

The former Daily Show host has a deal to sell his Alston Court property for an undisclosed price, according to a notice of settlement filed with the Monmouth County Clerk last month. The prospective buyers are identified as Leslie and Jeffrey Fisher. [UPDATE: The deed, recorded September 15, put the price at $5.3 million.]

Stewart and his wife, animal activist Tracey Stewart, also own the 11-acre Hockhockson Farm in Colts Neck. Stewart did not respond to a redbankgreen email sent to the farm.

As reported by redbankgreen, Stewart’s $7 million stake in Red Bank began when he bought the Alston Court property, featuring a century-old Victorian mansion, for $3.8 million in December, 2009 through an entity called Shamsky Monkey Trust.

Just six months later, he bought the adjoining property, on Fisher Place, for $3.2 million. That one is still listed as owned by a Stewart entity called Red Bank River Trust.

At the time, the broker of the second deal told redbankgreen that Stewart “was planning major renovations on Alston Court, and he wanted a place for his family for the summer, and so he went and purchased the house next door. I guess when you have the means to do it, it’s nice.”

In the interim, has a new current affairs show, called “The Problem with Jon Stewart,” that begins September 30 on Apple TV+.