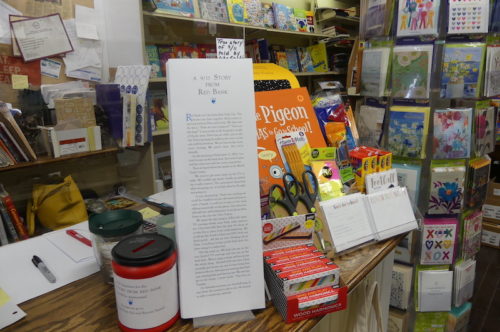 John Grandits’ account of his neighbor’s escape from the World Trade Center is for sale at River Road Books for $1, with proceeds going to volunteer fire and first aid. Below, Drew Irving. (Photo above by John T. Ward. Click to enlarge.)

On the morning of September 11, 2001, Red Bank resident and children’s author John Grandits could see his neighbor Louise Irving in an agitated state on her back porch, her sister’s arms wrapped around her.

Then he learned what was happening in New York City, and immediately remembered: Louise’s husband, Drew, worked at the World Trade Center.

Days later, Drew, of Spring Street, stopped by Grandits’ Elm Place home, and told Grandits how he and a co-worker had escaped the horror, struggling their way down the stairs from the 67th floor of the first building struck by a hijacked airliner.

Grandits, an author of children’s books, said Irving’s account has stayed in his mind for the past two decades, “so I decided to write the damn thing.”

Rendered in the style of concrete poetry, the oversized one-sheet account fills two vertical voids in the shape of the twin towers.

It recounts how Irving helped his boss, Janet Liso, who had asthma, down the stairs as firefighters ran up, toward danger.

They made it outside, where a news photographer grabbed a dramatic photo of Liso lying on the ground, with Irving cradling her head and looking skyward.

Liso convinced Drew that they had to leave the scene, and they were a safe distance away when first, the south tower fell, and then the one they had been inside.

Alongside his poem-story, Grandits writes:

You live in your neighborhood. It’s filled with regular men and women. They go to the supermarket. They walk the dog. They trim the hedges. They take a casserole over when someone’s sick.

It’s easy to forget that ordinary people can be extraordinary.

It’s easy to forget that ordinary people can be heroes.

The simple publication is available for $1 at the Red Bank Public Library and at River Road Books in Fair Haven. All proceeds will be donated to the volunteer Red Bank Fire Department and First Aid Squad, said Grandits.

The squad building is located directly across the street from Irving’s house.

“I greatly appreciate John’s thoughts regarding me in his poem about 9/11,” Irving told redbankgreen via text.

As for the memory of that awful day, “it’s always is integral back of my mind,” he said. “When it approaches it’s like a dark cloud coming.”

But the 20th anniversary “is just another 9/11 year for me,” Irving said. “I hope we learned from this and never forget.”