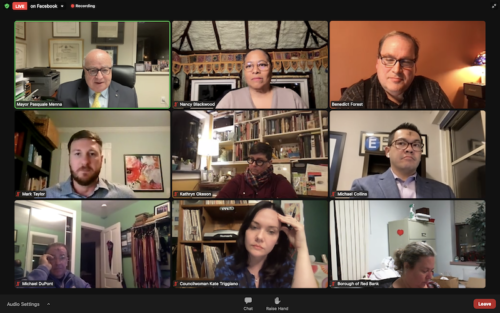 Mayor Pasquale Menna on Wednesday joined a growing parade of current and former Red Bank officials who have identified “interference” by council members as one of the borough government’s foremost problems.

In stunning testimony before the Charter Study Commission, Menna also was one of three Democrats who laid blame for local government “dysfunction” squarely on their own party. 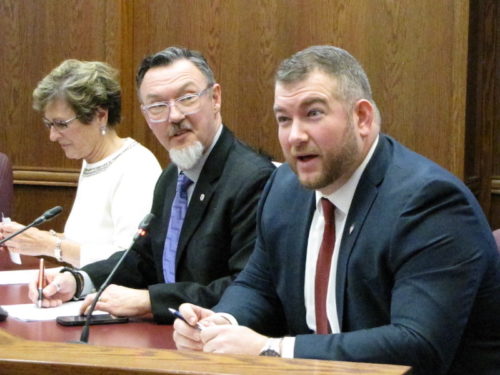 Erik Yngstrom, right, on his first day as a councilman in 2017, with council members Kathy Horgan and Ed Zipprich. (Photo by John T. Ward. Click to enlarge.)

During commission interviews, conducted via Zoom:

• Menna, referring to the absence of Republicans from recent borough elections, said “the complete self-destruction of an opposition party” means that “you have one party running everything, and you have a chairman who runs that party.”

• Former council member Erik Yngstrom additionally spotlighted what he considers a root cause of interference in local government operations: council members being appointed as liaisons to municipal departments.

• Councilwoman Kate Triggiano decried her own party’s “paranoia” about new ideas as an element of “dysfunction.”

All three endorsed nonpartisan elections, in which any resident who collects enough signatures can get on a ballot, bypassing the major-party endorsement process.

But they refrained from naming names of those they consider guilty of fostering “dysfunction,” though all have decisively split with fifth-term councilman and party Chairman Ed Zipprich, whose specter loomed throughout the nearly three-hour session.

The commission, created after overwhelming voter endorsement in November, is studying past and existing conditions in municipal operations with the aim of recommending changes that could include a new charter, or form of government.

Along with that could come nonpartisan elections.

Any such changes would have to be approved by voters in another referendum this November.

Menna, who is seeking a fifth four-year mayoral term, after having served 18 years as a councilman, told the committee that for “many decades,” borough government worked “as it was intended.”

He credited “professionals and quasi-professionals who worked 40 or 50 hours a week,” managing day-to-day affairs and implementing the policy decisions of the council.

But “in the past 10 years or so,” he said, “a new breed of government leaders” has been “at borough hall, day in and day out, second-guessing and interfering in many different ways with the orderly professional operations of the government.”

Menna said it is “frustrating… when the chief officer of the municipality tells you to your face, ‘I was told to keep these things away from you.'”

In that instance, which he did not detail, he said the administrator had been directed “by other council people. And I’m not going to mention names.”

In his first public appearance since his abrupt resignation on January 19, when he cited a “toxic” political atmosphere, Yngstrom told the commission that the borough form of government in place since 1908 encourages the formation of “little fiefdoms” and “silos” organized around government departments.

“I don’t think that’s where we should be going,” Yngstrom said. The council should set policy and department heads should execute that policy. Instead, he said, council people can begin to view themselves as department leaders.

Commission member Mark Taylor, a former council member who helped kick-start a drive for nonpartisan elections, told Yngstrom that “it never struck me that the committees were so important in creating those silos and some of the dysfunction that we’ve seen.

“You really kind of opened my eyes with that statement,” Taylor said.

Yngstrom acknowledged that he had “benefitted” from the Democratic party machinery by being put up as a council candidate after two years on the zoning board.

“You really have to know somebody to get the [ballot] line and become a potential councilperson,” he said. A “lot” of residents who would make good members “get passed up because they’re not in the in-crowd, and I saw that in my five years. Eventually, it got to a point where I said, ‘this has to stop.'”

Triggiano, whose second three-year term began January 1, said she sees her role as “a policy maker” and “community outreach liaison” who doesn’t “interact directly with department heads,” but instead goes through a chain of command headed by the business administrator.

“There’s a paranoia around the local Democratic party, and that’s unhealthy,” she said. “I don’t know when that started,” she said, but was aware of multiple, community-minded Democrats “who basically feel being unwelcomed by what they see as their party.”

The dysfunction can’t be blamed on interparty politics. Except for a brief period in 2016, Red Bank’s Democrats have been in the council majority since 1989, and  every seat on the seven-member governing body has been held by a Democrat since 2019. Republicans have not had candidates on the ballot for the past two years, and Menna won his last two elections unopposed.

Menna cited the “self-immolation” of the local GOP for giving Democrats free rein.

“And I would suggest that self-immolation was transferred to the subsequent one-party control,” said Taylor, who served his one term on the council as a Republican.

Zipprich has been invited to appear before the commission at a special session March 10, but had not responded as of Wednesday night, said commission Attorney Michael Collins.

Councilman Michael Ballard has committed to attend, she said.