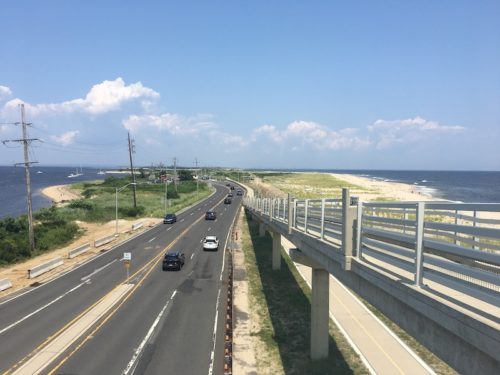 According to the announcement, Junor and a woman he’d met a day earlier went on a date to the park on Friday, June 5, 2020.

There, near parking lot C, a good Samaritan flagged down a National Park Service employee to alert them to the presence of an injured adult female in the area, the announcement said.

The victim, who had sustained a leg injury, was transported to a local hospital for treatment.

An investigation by the MCPO Special Victims Bureau determined that the victim and the defendant had met the day before in Jersey City and had agreed to go on a first date at Sandy Hook. But after spending time on the beach, the investigation determined, he guided her to the backseat of his vehicle, forcibly removed her clothing, exposed himself, and sexually assaulted her – all while she loudly and repeatedly refused consent.

The victim fought back physically, and when she opened the car door to leave, Junor pushed her out onto the pavement and left the scene in his BMW, running over her foot on the way out of the parking lot.

The victim’s testimony, the witness’s testimony, and physical and digital evidence were leveraged to prove the case at trial.

Junor, who was represented by defense attorney Michael Kuhns, faces up to 20 years in state prison for the offenses. Sentencing was scheduled for May 6.