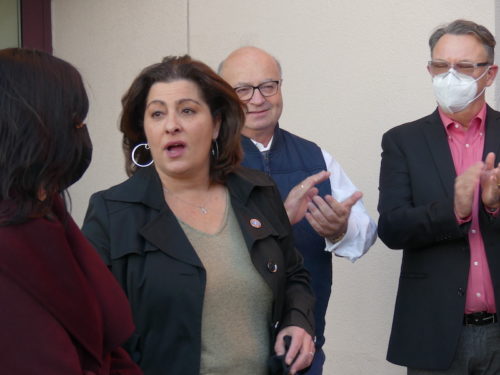 Red Bank’s establishment Democrats have “admitted” in a court filing that last month’s appointment of Angela Mirandi to the borough council was tainted, challengers contended Tuesday.

Two party dissidents said in their own court filing that the purported admission bolsters their argument that Mirandi should be swiftly removed from the governing body.

Horgan and Okeson, both Democratic party committee members, sued February 22 to have Mirandi removed from office, contending her appointment to succeed Erik Yngstrom on the council was invalid. They cited the fact that they had been excluded from back-room deliberations about potential nominees.

After Zipprich, who also serves as a council member, submitted the names of Mirandi, Stephen Hecht and John Jackson, the council on February 9 approved Mirandi’s appointment by a 3-to-1 vote, with one abstention, to serve through the end of 2022.

Horgan, complaining that she’d been left of the party selection process, cast the no vote. Okeson claimed in the lawsuit that she was left out even though she’s the local party secretary.

In a letter Monday to Judge Andrea Marshall, attorney Daniel Antonelli, representing both Zipprich and the committee, argued that Zipprich had failed to submit the names of three nominees to the council within 15 days of Yngstrom’s resignation, as required under state statute.

But that lapse simply meant the council “was within its right to fill the vacancy provided it did so on or before February 18, 2022,” the letter says.

In a response Tuesday, also filed in the form of a letter, Thaddeus R. Maciag, attorney for Horgan and Okeson, blasted that as a specious “no harm, no foul” defense.

The council was not informed that the nomination deadline had passed unmet, Maciag wrote. Nor was it advised that it was “free to choose any registered Democrat in the entire municipality to fill the vacancy,” rather than limit itself to the three names submitted by Zipprich, Maciag wrote.

Instead, he said, Zipprich “plainly and unambiguously ‘presented to the governing body’ the names of three nominees” to fill the vacancy, and that the council thus limited its consideration only to those three.

“This is decidedly NOT a case of no harm, no foul,” as the committee is effectively arguing, Maciag wrote. Mirandi’s “unlawful purported appointment” needs to be quickly adjudicated, he wrote, “without the continuing and ongoing harm of an illegally appointed Borough Councilmember participating in and voting on municipal business.”

Late Tuesday, in another letter to the court, Antonelli responded that “based on the statute, the Council was not bound by [Zipprich’s] List when filling the vacancy and was free to choose a person on the List or not.”

But in yet another letter, filed Wednesday, Maciag replied that “essential fact” is that the three names “were unlawfully and invalidly presented to the Council by Zipprich.”

Maciag alleged a “false assertion” by Zipprich to the council that the list was “put forward by the committee,” even though “the Municipal Committee did no such thing,” Maciag wrote. Instead, Zipprich went beyond his authority as chairman and submitted the names without a committee vote, Maciag claimed.

No hearing dates have yet been scheduled in the matter. The borough itself is a defendant in the case, along with Zipprich, Mirandi and the committee.