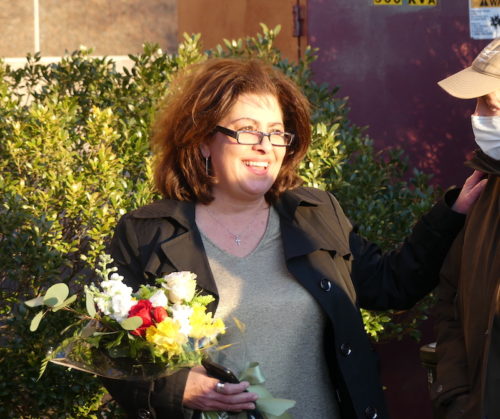 Red Bank’s establishment Democrats contend that their own failure to meet a deadline means the appointment of Angela Mirandi to the council should stand.

The unexpected argument was made in a letter filed in Superior Court Monday in a response to a lawsuit filed last week by Councilwoman Kathy Horgan and Charter Study Commission member Kate Okeson.

Horgan and Okeson, both members of the Red Bank Democratic Municipal Committee, sued February 22 to have Mirandi removed from office, contending her appointment was invalid, in part because they had been excluded from the back-room deliberations over who might succeed Erik Yngstrom on the council.

The legal action names the local Democratic committee, along with its chairman, Ed Zipprich, as defendants. The borough is also a defendant.

The suit argues that Mirandi should be removed immediately, “because her continued presence will call into question the validity of all upcoming governing body actions, including but not limited to the adoption of a budget and bond ordinances.”

Though the defendants have yet to formally answer the complaint, Daniel Antonelli, an attorney for the Democratic organization, filed a letter with Judge Andrea Marshall Monday asking that the court “refrain from entering temporary restraints absent a hearing.”

In the letter, Antonelli did not address the lawsuit’s contention that Horgan and Okeson were excluded from the vetting process.

Instead, he contended, the council “was within its rights to fill the vacancy by appointing a successor from the same political party.”

Antonelli cited a state law under which the organization was “was required to submit its list of three nominees no later than February 3” to the governing body, he wrote.

“The list, however, was submitted to Council on February 9, 2022, six days beyond the statutory due date,” Antonelli wrote, without explanation for the lapse.

In such cases, Antonelli argued, the governing body then has another 15 days “to fill the vacancy by the appointment of a successor from the same political party which had nominated the incumbent whose office has become vacant.”

“Since the municipal committee failed to submit the names of the nominees within 15 days after the vacancy, the power of appointment shifted to Council, who was within its right to fill the vacancy provided it did so on or before February 18, 2022,” the letter says.

At the February 9 council meeting, no mention was made of the missed deadline as Zipprich proffered as potential successors to Yngstrom three candidates: Mirandi, Stephen Hecht and John Jackson. Mirandi was approved by a 3-to-1 vote, with one abstention, to serve through the end of 2022.

The vote was taken over Horgan’s objection that she had not been included as a party committeewoman in the nomination process. Council President Kate Triggiano also contended she was excluded. Triggiano is not a party to the lawsuit.

Democrats hold all six seats on the council, as well as the mayoralty, but have been increasingly divided into two factions in recent years. Zipprich, also a council member, leads one faction that has been opposite one that includes Horgan and Triggiano.

In their lawsuit, Horgan and Okeson, who serves as the party’s secretary, allege the municipal party’s committee “never held a meeting with all of its members invited to review candidates or select the subject three names,” as required by law, before Zipprich submitted the three names to the council.