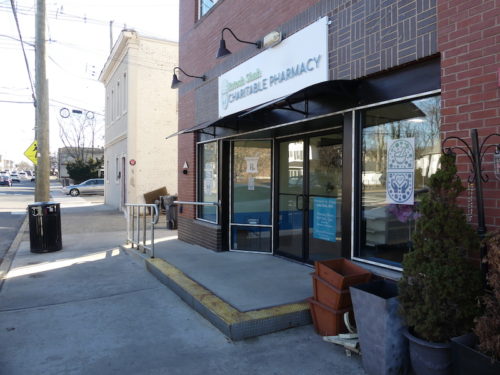 The Ritesh Shah Charitable Pharmacy is expected to open in April, its founder said. (Photo by John T. Ward. Click to enlarge)

Red Bank is about to become home to New Jersey’s first free-medication drugstore, its founder told redbankgreen this week.

Pharmacist Ritesh Shah said he plans to open the no-charge dispensary next month in memory of his sister, who died from complications of COVID-19. 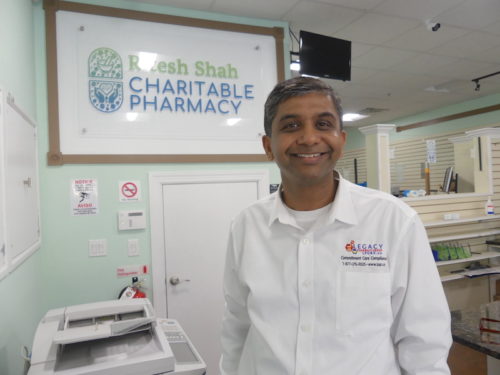 Pharmacist Ritesh Shah in his soon-to-open store, above, and with Dorothea Bongiovi and Jon Bon Jovi at Pilgrim Baptist Church in 2018. (Photos by John T. Ward. Click to enlarge.) The Ritesh Shah Charitable Pharmacy, at 224 Shrewsbury Avenue, will focus on providing commonly used medications for chronic conditions, such as blood pressure and heart disease, diabetes and mental health.

Prescribed drugs will be available to uninsured customers whose yearly earnings are no more than three times the federal poverty guidelines of $12,880 for an individual and $26,500 for a family of four, Shah said Monday.

“Anybody who is struggling to buy medicine, or put food on the table, we’re going to give them medicine at no charge,” he said. The store’s formulary covers about 185 medications; no narcotic drugs will be dispensed, he said.

Signs identifying the pharmacy went up over the weekend at the the vacant former home of the Shrewsbury Avenue Pharmacy, just three days after the New Jersey Board of Pharmacy approved the store and its formulary, Shah said.

Shah constructed the building, which has four apartments on two upper floors, and opened the Shrewsbury Avenue Pharmacy on the ground floor in June, 2017. He later sold the business, but it failed under the new owner in late 2020, Shah said.

The charitable pharmacy will operate rent-free in the storefront, managed by Shah’s wife of 26 years, Asha, also a pharmacist. The couple own four other pharmacies in Monmouth County.

Before and during the pandemic, those stores gave the Shahs a front-row seat on the challenges many customers faced in paying for expensive maintenance drugs, Shah said.

Prescriptions written by clinics often are “not reaching the pharmacy,” because patients must choose between eating or paying rent and buying medication, he said. An income of $36,000, three times the federal poverty level, is quickly “gone” covering only basic living expenses, he said.

The idea to give medications away solidified in late October, after Shah’s “baby sister,” 43-year-old Rena, died from complications of the coronavirus in their native India, he said.

Shah had traveled to see his sister, a diabetes patient, who was in a hospital on a ventilator, but she died as he was en route from the airport, leaving his family “devastated,” he said, choking with emotion.

Returning home to Freehold, “I told my wife, ‘God is good to us,'” Shah said, but the money he earns “is not helping me. What helps me is giving back to the people.

“I can cry about it or I can do something about it,” he said about his loss. Now, “I’m pretty sure my sister is happy and smiling down on us.”

In addition to income from his own stores, Shah pulls in a salary as chief executive officer for Legacy Pharmacy Group, a purchasing operation for about 550 independent community drugstores in the mid-Atlantic region.

Shah said he is seeking 501 c-3 nonprofit organization status to fund the drugstore. In the meantime, he said, he and Asha plan to cover the costs out of their own pockets. He has yet to decide whether he’ll stock and give away over-the-counter medications, he said.

“I’m not a red-tape guy, I don’t want to wait for the bureaucracy,” he said. “I just want to start doing business.”

Customers will be asked to fill out a short online form once to establish their income eligibility, Shah said. Those who don’t have paperwork on their first visit will be asked to bring it on their second, he said.

“When they come in, I want to make sure they don’t go out without medication,” he said. “These are life-saving medications.”

The program will not only prolong and save lives of customers, but reduce the burden of hospital costs borne by taxpayers and insurance customers, Shah said.

Red Bank resident Matt Anderson, who serves on the new pharmacy’s board of directors, told redbankgreen that when Shah explained the concept to him last year, he saw it “would have a positive effect on the community.”

But after a friend who works as a medical intern at the Parker Family Health Center across the street spoke excitedly about the pharmacy, “it became clear to me just how important this will be, and how large of an effect it will have,” Anderson said.

Other states have seen no-charge drugstores open ahead of New Jersey, Shah said, citing Tennessee-based Dispensary of Hope and others.