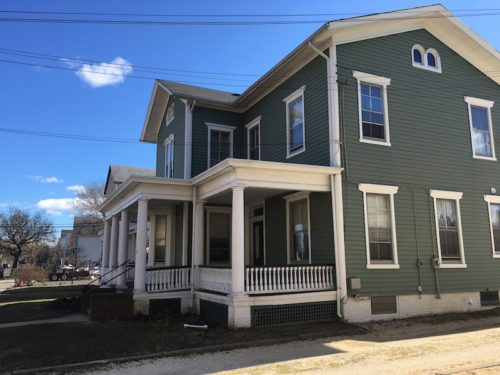 Downtown Investors has dropped its plans to demolish the house at 26 Wallace Street for parking. (Photo by John T. Ward. Click to enlarge.)

A century house targeted for demolition in downtown Red Bank has been spared the wrecking ball, redbankgreen has learned.

Downtown Investors, which had hoped to raze the house at 26 Wallace Street to create parking for a future office building, pulled its proposal from the borough planning board on Monday, company principal Jay Herman told redbankgreen Wednesday.

“After the last Planning Board hearing, it was pretty clear that we would not get the plan approved as designed,” Herman said via text. “Accordingly, we have withdrawn our application.”

At the board’s February 7 session, the plan met with public opposition over the loss of historic character. More was expected in the form of testimony by members of the borough’s Historic Preservation Commission when the hearing resumed March 21.

The HPC rejected the company’s proposal in October.

For the past year, Downtown Investors had a contract to buy the property, located just steps from Broad Street. Earlier this week, the house was listed for sale, at a price of $899,000.

Herman said the company “has no plans to move forward” with a plan to develop an office building on Linden Place that would have been served by the parking lot.