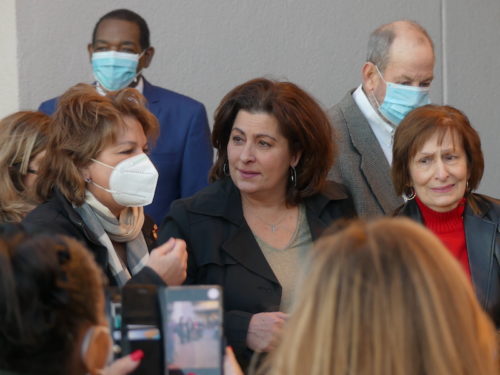 A Monmouth County judge postponed a decision Wednesday on whether Angela Mirandi can retain her seat as an appointed member of the Red Bank council.

Mirandi, a political newcomer, was appointed by the borough council on February 11 to succeed Erik Yngstrom, who had abruptly resigned three weeks earlier. The appointment to serve through the end of 2022 followed a 3-to-1 vote, with one abstention.

Councilwoman Kathy Horgan, who cast the “no” vote, and Charter Study Commission member Kate Okeson filed suit in Superior Court February 22 to have Mirandi removed from office, contending her appointment was invalid.

Horgan contended that she’d been left of the party selection process by Democratic Municipal Committee Chairman Ed Zipprich, a council colleague. Okeson claimed in the lawsuit that she was excluded, even though she’s the local party secretary.

In a court session conducted via Zoom Wednesday, Judge David F. Bauman agreed to postpone a hearing at which the plaintiff’s sought Mirandi’s immediate removal. The request also calls for the seat to remain vacant until voters decide on a successor in November.

“I don’t believe I can represent the borough in this matter,”  Cannon said. “There’s a significant risk that my representation of one or more of the clients here would materially limit my responsibilities to the others as the borough attorney representing all of them.”

He told Bauman the borough is seeking to have the Joint Insurance Fund in which it participates designate alternate representation.

Bauman appeared irritated, and reminded Cannon that the plaintiff’s request was “emergent” and had been made in court filings weeks ago.

He agreed to reschedule the matter until Monday morning. No council sessions have been scheduled in the interim.

Mirandi, who was appointed to serve through the end of 2022, attended the online hearing and told the court she did not have an attorney.