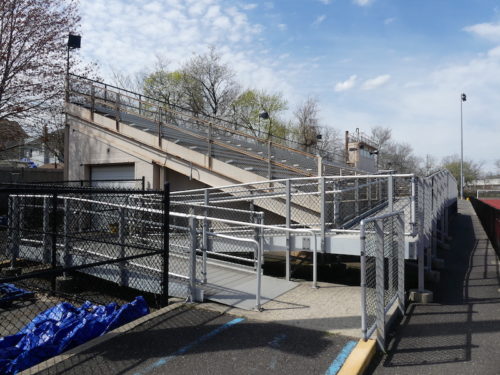 Officials said the loose asbestos was limited to a boiler room and transformer room beneath the main grandstand. (Photo by John T. Ward. Click to enlarge.)

Red Bank’s interim business administrator said Friday there is “no cause for concern” as the town moves forward with a plan to address recently discovered asbestos in an area beneath the grandstand at Count Basie Field. 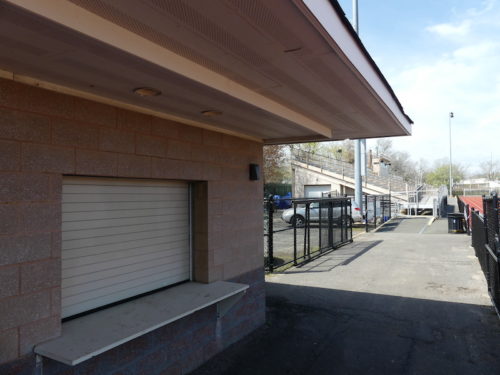 Concerns were raised about the relocation of equiment to the nearby concession stand. (Photo by John T. Ward. Click to enlarge.)

The mineral, once widely used as an insulator but now known to cause cancer, was found around February 8 beneath the main grandstand, said public utilities Director Cliff Keen. It was spotted in rooms containing a boiler room and an electrical transformer by a building code official who was there on an unrelated task, he said.

The two rooms are “only accessible by staff,” he said.

The inspector noticed powder on the floor that had not been present when the space was last visited in November for winterization, Keen said.

The powder was traced to pipe wrap that “started to deteriorate and flake off very quickly,” Keen said. The pipes have not been in use for 20 or more years, he said.

The building was “shut down immediately,” Keen said.

An environmental remediation consultancy called in by the administration confirmed that the substance was asbestos. The firm also found “no evidence that there’s airborne asbestos or anything like that,” Keen said.

But the loose substance “is something that we need to remediate as quickly as possible,” Keen said.

The building contains locker rooms are that “used by primarily children, so we do not want that to be an issue.”

Red Bank Catholic High School, which has a longterm agreement for use of the facility, has a locker room there, “but it seems like most of the piping was between the part that Parks and Rec uses” and lockers used by the Red Bank Middle School or regional high “that’s adjacent to that locker room. That’s where most of the stuff was,” Keen said.

Equipment RBC had stored in the building was moved to the nearby concession stand for temporary storage during the remediation,

“It wasn’t airborne, and there were no particles in that area,” he said. “The particles that were loose were in the boiler room” and electrical transformer room, “not where anything was stored” for RBC, he said.

Asbestos on pipes in the locker rooms has not deteriorated, McConnell said, “but it has the potential too, so now that we know its there, it’s time to remediate it.”

“Do you think that was a wise move to put that equipment in a food storage area without the OK from an expert that there’s no contamination?” Councilman Michael Ballard asked.

“We did have the OK from the expert,” Keen said.

“I’m just troubled that we took equipment from an area where we found asbestos pipe covering and put it in a food storage area,” Ballard said. “That really concerns me.”

Keen said he would check with the experts to confirm that the concession stand had not been contaminated.

During the public comment portion of the council’s regular meeting, Adrienne Bilaal of Pearl Street voiced concern that moving equipment into the concession booth would impact fundraising for the Parks and Rec department’s planned Juneteenth celebration, for which she is chairwoman.

“All of a sudden, the decision was made to move the items out from under the bleachers into the concession stand” without consultation with the Juneteenth organizers, she said. She asked why a trailer wasn’t used instead.

“Because that really hurt our event,” she said. She asked that the borough provide funding to the event.

Given a choice of removing the boiler or sealing the system in place, the administration recommended sealing, because the removal would cost an estimated $170,00o more, Keen said. The sealing would last “forever,” he said.

At its regular session following the workshop, the council adopted a resolution awarding a $146,000 contract to AllRisk Inc. for the remediation work.

Though Keen said funding for the work would come from a trust account of revenue from parking at Marine Park, McConnell said Friday that the money is instead in “an existing capital account with available funds, not the Marine Park revenue.”

In an update provided to redbankgreen in response to questions, McConnell said AllRisk is expected to start work next week, and with the project expected to take several weeks to complete.

In an email, McConnell wrote:

Based on the facts and circumstances as provided to our environmental contractor, they have indicated that there is no cause for concern. However, based on the worries raised at the meeting the other night, they are going to be on site next week and will conduct a formal evaluation to confirm that there is no contamination.

The facility “will in the end be deemed by the environmental consultant to be safe for occupancy/use” before it is reopened, he said.