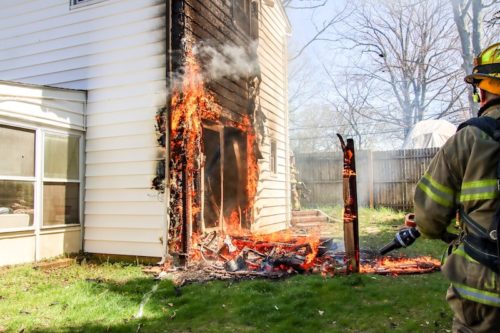 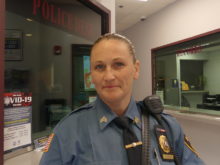 A Red Bank police officer helped two families  escape from a fire in their attached homes in Middletown last week.

Sergeant Heather Kovar (right) was driving in the township on police business shortly after noon Friday when she noticed gray smoke rising behind a fence alongside what appeared to be a single-family house at 81 Twin Brooks Avenue.

Though she couldn’t see the source, which was obscured by a fence, she could see flames near the ground, and presumed the homeowner was using a fire pit, Kovar told redbankgreen Monday.

She continued driving a short distance, but “something didn’t sit right,” she said. “I thought, that looked awful big for a fire pit.”

Kovar said she put her vehicle in reverse, and then could see that the siding on the house had caught fire.

She alerted RBPD to call Middletown PD and knocked on the door of the house, telling the woman who answered that the house was on fire, Kovar said.

Kovar helped the woman, her two children and a dog get out. In the process, she learned there was a second, attached dwelling unit she hadn’t been aware of that was also occupied.

In that unit, at the end of the house furthest from the fire, Kovar found a woman, also unaware of the blaze, with three young children, including an infant and a dog.

The second woman was worried about leaving without necessities, and wanted to gather them up.

“I knew she was going to need some diapers, formula and car seat, so she could leave,” said Kovar, a 15-year member of the RBPD who’s also the mother of 10-month-old twins.

In the process, she grabbed what she thought was the woman’s cellphone, but turned out to be a toy phone. Though the fire had not spread to the unit, Kovar advised the woman that going back for the phone was unsafe.

Information about the cause of the fire and the habitability of the house was not available Monday.

The takeaway from the episode for police?

“Go with your gut,” Kovar said.