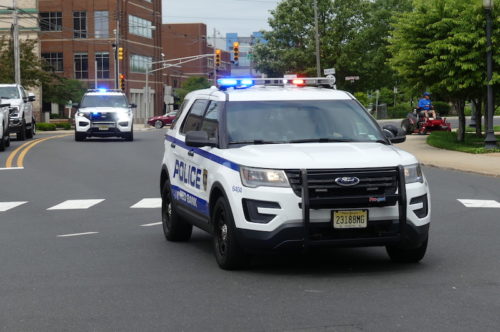 A Shrewsbury man was unhurt as he attempted to stop the theft of his car in downtown Red Bank Tuesday, police said.

On Tuesday, April 19, 2022 at approximately 1140 hrs. Red Bank Police responded to the area of Maple Avenue and White Street for a report of a possible pedestrian struck by a motor vehicle.

Upon the arrival of Ptl. Froilan Hernandez, he quickly ascertained that no pedestrian was struck; however learned that there had just been a car theft.  During that time, the victim / owner of the vehicle, Lawrence Durso, of Shrewsbury, advised that he parked his 2021 Porsche Cayenne SUV in an angled parking space along White Street and left it running as he entered a nearby store.

The victim indicated that within a short period of time, he observed from within the store an unknown black male dressed all in black exit a black SUV and enter his vehicle.  The victim immediately ran from the business over to his vehicle and attempted to stop the theft by blocking the vehicle’s path.  In doing so, the victim fell to the ground as the vehicle was backing out of the parking space.  Thankfully, Mr. Durso was uninjured, however the unknown actor(s) got away with his vehicle.

While many agencies in Monmouth County continue to see an increase of vehicle thefts, law enforcement agencies remind all vehicle owners to be vigilant and remove their key fobs and lock their doors when leaving their vehicle unattended.

This incident is still under investigation and we ask the public that if anyone has specific information to please contact Sgt. James Deponte of the Red Bank Police Department, at 732-530-2700.

Several news outlets reported the matter as an unconfirmed carjacking.

UPDATE, APRIL 20: Frazee told redbankgreen the car was found abandoned in Newark Wednesday morning. Because the thief or thieves did not have the key fob – the owner still had it – restarting and moving the vehicle would have been difficult, he said.

No arrests have been made, Frazee said.