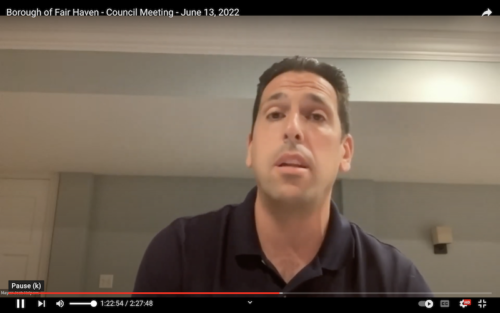 The 6-0 vote followed a showdown between Halpern and several council members over his blockage of resolutions he said are not local issues. 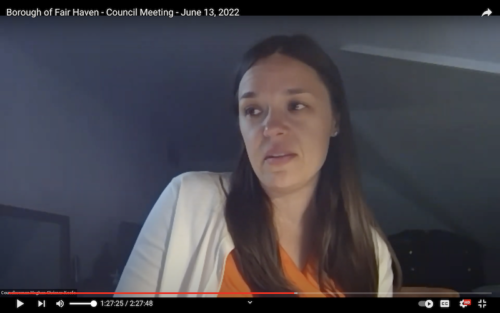 The action culminated nearly 40 minutes of debate sparked when Halpern, reading from a prepared statement, said he was using his prerogative over the agenda not to post a resolution urging national leaders to address access to assault weapons, improve mental health care and provide greater school security.

Halpern called the May 24 murders of 19 children and two adults at an elementary school in Uvalde, Texas “disheartening, devastating and unimaginable.”

But while he admires “the passion to address what is a very important national issue,” Halpern said, borough residents are “not interested in national politics making their way into our local governance. Nor am I.”

Matters that are not “Fair Haven-centric or things we can specifically control” are “just words on a piece of paper that do not provoke meaningful action and will not result in any interventions to the problem at hand,” he said. “Thoughts and prayers do not stop bullets or mentally unstable people.”

Halpern, a Republican appointed as mayor last October following the resignation of Ben Lucarelli, continued: “I don’t think a resolution by a governing body that has no authority to govern on this issue achieves what we would all want it to achieve.”

Instead, he endorsed local action to improve school security, including having police in schools and the use of “bulletproof bookcases that can be placed in front of classroom doors in the event of an attack.”

Councilwoman Chrisner-Keefe, who co-wrote the resolution with Council President Chris Rodriguez, successfully moved to put the resolution on the agenda.

Rodriguez noted that, in 2018, the council adopted a resolution calling on Congress to adopt “common sense” limits on guns. He was the only Democrat on the council at the time, and said the governing body “locked arms” on the statement.

“We didn’t find this to be a political issue, or a partisan issue, or a national issue, but more a humanitarian issue that needed to be called out,” he said. “Our community will not tolerate this.”

“This is a local issue for all of these communities, including our own,” he said. “And we’ve got to put a stop to this.”

“I could not support this resolution more,” said Councilwoman Laline Neff. “This is a local issue. It’s not a national issue. It could happen in any neighborhood, god forbid. It could be anybody’s school.”

“Thinking about it as a national issue pushes it far away from us,” she said.

Halpern said he had also blocked a resolution regarding the Ukraine. “What happens when next someone wants to do a resolution objecting to the price of gasoline?” he asked. “When does it stop?”

Showing evident frustration, Rodriguez said Halpern was “conflating free market gasoline prices with the death of children, and I take exception to that.”

“You don’t get to vote, so it really doesn’t matter,” he told Halpern, alleging he had previously “gagged” council members on other resolutions.

“The precedent’s there, sir,” he said. “You’re setting new precedent.”

Neff agreed that it is “for the council to determine” if a resolution is effective. “You should start by not blocking them,” she told Halpern.

Councilwoman Tracy Cole voted with her five colleagues to approve the resolution under an omnibus, or consent, vote on a dozen routine resolutions. Before the vote, however, she said she was on the fence about the gun measure.

“Is it my place? I’m not sure it’s my place,” she said. Taking on national issues at the local level “makes people uncomfortable,” she said.

“This topic’s always on my mind,” said McCue, a Marine Corps veteran who’s been a teacher for nine years. “Every opportunity I have I’ll use my voice to educate and bring awareness.”

“While we cannot directly legislate gun safety, the implementation of safety measures at the local level with taxpayer dollars evidences that it is in fact a local issue and concern,” Chrisner-Keefe told redbankgreen Wednesday. “Our collective voices raise awareness and encourage activism to demand increased gun safety measures not just for our community, but the entire country.”

Here’s full video of the session. The gun measure debate begins around the 1:20:00 mark.