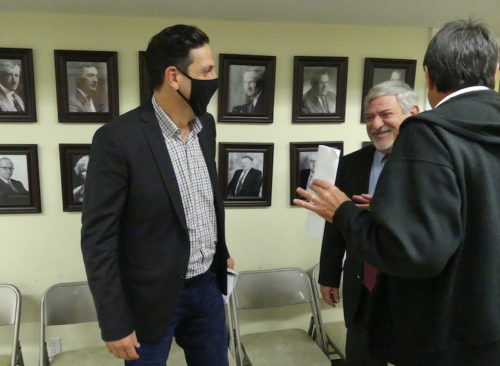 A political newcomer is set to become Fair Haven’s next mayor.

At its semimonthly session Tuesday night, the council chose Joshua Halpern, a 10-year borough resident who’s never served on a government committee, to fill the chair vacated by Ben Lucarelli when he abruptly quit September 14.

Halpern’s term as mayor would run through December 31, 2022. Lucarelli, who became mayor in 2012 after three years on the council, did not attend the meeting and has not offered a public explanation for his resignation.

Halpern’s first taste of government as presumptive mayor was a council session that lasted four hours – not counting an executive session – and included extended debate of a plan to install sidewalks on two streets and two deadlocked votes, with no mayor to break the ties.

Democrat Mike McCue nominated Halpern. Neither Koch nor fellow Republican Suzanne McCabe spoke about the nominee. In fact, there was no discussion of any of the nominees before the council gave Halpern unanimous approval.

Following the vote, Council President Chris Rodriguez congratulated Halpern, whom he said is expected to have a “proper” swearing-in so he can take the helm at the council’s next session on October 25.

Seated in the back row of the council chamber, against a wall lined with black-and-white portraits of his mayoral predecessors, the 42-year-old Halpern didn’t speak.

Afterward, Halpern told redbankgreen he was “very excited about the opportunity to give back to a community that gave so much to me and my family.”

He said he had thrown his own hat into the ring for consideration, and others who knew of his interest had encouraged him to seek the nomination.

Because he has had no experience with local government, Halpern said he’s “coming in with a fresh approach.”

According to a one-page biography, Halpern is a graduate of the University of Delaware who “was born and raised in Monmouth County” and lived in Manhattan, where he “supported the rescue and cleanup effort of the Twin Towers by helping to feed frontline emergency personnel in the aftermath of the attacks.”

Since moving to Fair Haven in 2011, he’s been active as a coach in recreation and travel sports, and “hosts various social and charitable events, including the Fair Haven Bingo Social Club and the Halpern Invitational Charity Ping Pong Tournament,” his bio says.

A packaging industry salesman, Halpern and his wife, Nicole, have two children, both students at Knollwood School.

After the regular council session, borough Attorney Greg Cannon informed Halpern that he was welcome to attend the closed-door executive session.