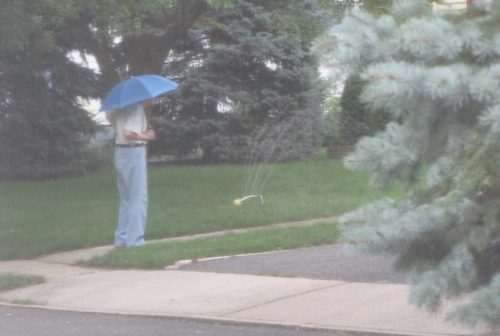 A Red Bank man watering his lawn during a light rain in July, 2013. (Photo by John T. Ward. Click to enlarge.)

Amid the hottest stretch of weather so far this summer, Red Bank’s water supplier has instituted a water conservation restriction.

From the company’s announcement:

“The recent extreme heat wave has prompted customers to increase their water usage significantly over the last week, and while we did previously request voluntary odd/even outdoor watering, we are continuing to see significant demands on the system that now require us to make this a mandatory order,” stated Carmen Tierno, senior director of operations. “We are putting this restriction in place to support our ability to continue to provide water and fire protection services to our customers.”

Customers are being notified via the company’s emergency notification system, alerting them to practice odd/even watering now to help the company manage a finite supply of water. The guidelines are provided below:

Exceptions are:
• Watering of new sod or seed if daily watering is required (Note: it is
recommended that any planting of new sod or seed that has not already
taken place be delayed until the fall)
• Use of private wells for irrigation
• Commercial uses of outdoor water, such as for nurseries, farm stands,
power washing, plumbing, athletic fields, and car washes
• Watering of athletic fields

The limits apply to all NJAW users in Monmouth and Ocean counties, the company said.

Here’s the extended outlook for the Greater Red Bank Green: