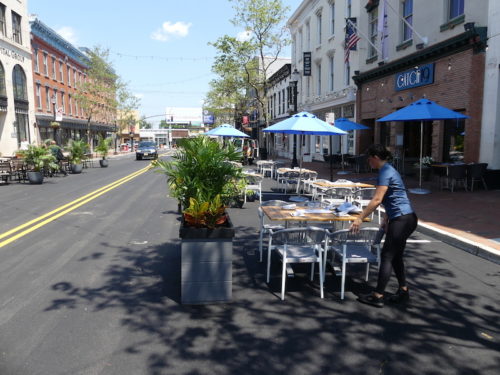 An employee of Catch 19  setting up tables Friday. (Photo by John T. Ward. Click to enlarge.)

With borough workers and contractors putting finishing touches on an eight-month-long streetscape  project, a handful of restaurants hastily set up for a return of Red Bank’s Broadwalk plaza Friday.

Outside the traffic-free zone, however, none of the parking-space streateries used over the past two summers have returned, following a sixfold increase in fees by the borough council. 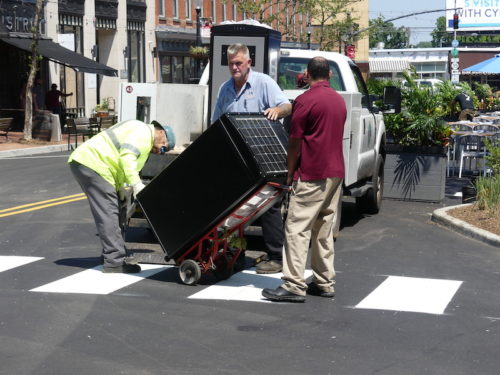 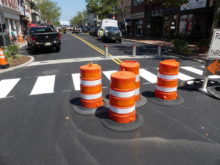 The permits allow for use of parking spaces for dining tables and merchandise displays through the end of the Broadwalk season, slated for September 6.

Workers were busy setting up tables, umbrellas and planted early Friday afternoon on the freshly laid blacktop. as a striping crew continued painting lane and parking demarcations nearby.

• The borough has had no takers for streateries outside the zone, following the council’s adoption last week of new, higher fees for the permits.

Red Tank Brewing owner John Arcara blasted the increase, which he said would have boosted his costs for the whole season to $5,400, from $800 in each of the past two summers.

“It’s vastly overpriced,” he told redbankgreen via text. “Sadly the council doesn’t have the ability to think like an entrepreneur or business owner. They really only think of themselves. If I didn’t live & own businesses in this ridiculous town, it would be really hilarious watching it’s downfall. I, however, do not find it funny. At this point everyone knows they are doing it on purpose.”

Visitors will continue to see orange security barrels in those locations, at least in coming days. McConnell said the barrels were being used temporarily to supplement the bollards.

“We want to make sure motorists are aware of the change in traffic pattern and ensure that it is safe,” he said. The barrels will probably be removed next week, he said.

• Though temperatures were in the low-90s by early afternoon, the Weather Channel forecast called for temperatures in the mid-80s and clear skies Friday night.