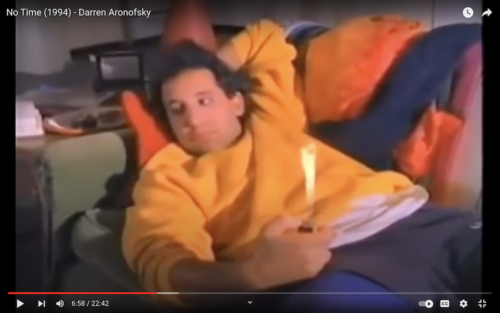 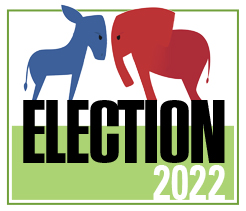 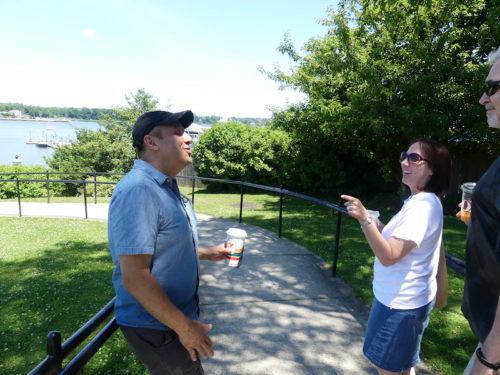 Portman chatting with a supporter at the Red Bank Pride in the Park event last Sunday, above, and at home last month, below. (Photos by John T. Ward. Click to enlarge.) 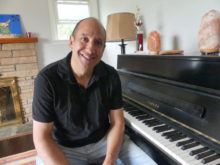 At the moment, Portman’s path to the mayoralty appears clear. Local Republican Chairman Jonathan Maciel Penney told redbankgreen Wednesday that GOP mayoral primary winner Brian Irwin is “100% a placeholder” on the November 8 ballot, with no replacement yet named. Likewise, the party’s slate for the two council seats is “not finalized,” Penney said. Penney and Christine Stout won the primary without opposition.

In recent interviews, Portman told redbankgreen he’s not taking for granted that he’ll win the election. In his free time from his job as a self-employed commercial building contractor, and when he’s not on stage singing with his party-time cover band So Watt, Portman said he’s schooling himself on government and listening closely to residents.

If elected, “I don’t want to have to change who I am,” he said, “but I also want to be respectful of who people think their mayor should be.”

Who he is, among other things, is former comedy troupe member and film actor.

Through the 1990s and into the early part of this century, Portman was in a comedy trio called No Time. His YouTube channel describes it as a “comedy/rap group.”

In 1994, while living in Los Angeles, the group produced a short film of sketches, also called “No Time,” directed by Darren Aronofsky, a friend of one of the members.

Aronofsky went on to win Hollywood fame for feature films “Pi,” “The Wrestler” and “Black Swan.”

No Time later toured the country, Portman said, and once opened for rap pioneers Run DMC. At the time, No Time had put out a satirical, “very non-PC rap record” titled “No Time High.”

Mocking the bravado of 1990s rap, the LP included “a song about how large our junk was – that was the brag,” Portman said.

“It’s filthy, absolutely filthy,” he said. “It was not like I was in my 20s thinking, ‘oh what if I decide to run for mayor someday?’ But it’s funny. We used to call them ‘intelligent dick jokes.'” The lyrics referenced Teddy Roosevelt and 15th-century navigator Vasco da Gama.

Portman said he’s unconcerned about the possibility that the record and another the group recorded might be used against him in the campaign.

“It’s not like, ‘oh no, my political career is ruined,'” he said. “I jumped into this not to become a power player in Democratic politics. I jumped into it because the town I lived in was a bit of a disaster, and I thought I could help.”

As previously noted by redbankgreen, Portman served for about a decade as emcee for the Topanga Days Country Fair, an arts and music festival in southern California, where a local media report cited “the familiar tenor of Billy Portman’s voice announcing the seed spitting contest” among the event’s charms.

In 2013, he acted in an independent thriller called “The Shoot” that screened at the Count Basie Theatre, and last year voiced a character in the animated short “Piccolo Junior’s,” by his cousin, Jon Portman.

“Once I quit acting, my acting career really took off,” he quipped.

In So Watt, Portman shares the stage with two friends he’s known since they were in a band together as eighth-graders in Ocean Township. “This is like my second-half-of life hobby, and it’s been just the best thing,” he said. (So Watt’s next Red Bank gig is scheduled for September 1 at Red Rock Tap + Grill.)

Might there by any carryover of skills from fronting a band and rapping about “junk” to serving as mayor?

“I think there is,” Portman said. “Whether you’re doing comedy or singing, even in a cover band, you’re communicating something. I think it helps that I’m a good communicator.”