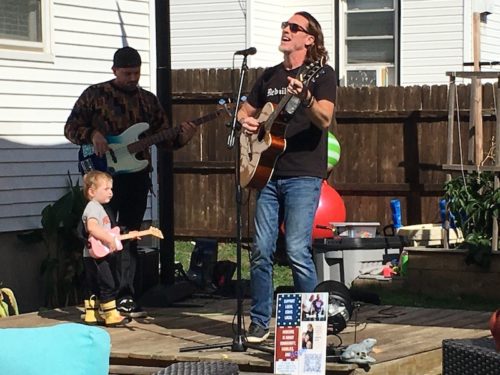 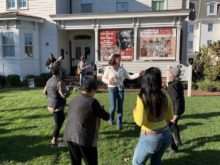 The five-hour festival, which Portman organized with HABcore executive Marta Quinn as a fundraiser for the housing nonprofit, put more than 80 musical acts on 22 porches, lawns and driveways across the borough. Each drew an audience, some in the hundreds.

Traveling around to the various porches, yards and driveways, “I just watched it grow as the hours got later,” Portman told redbankgreen.

The event was nonpolitical, Portman said, though “it is completely aligned with what I hope to do more of as a mayor, and that is bring people together, and focus more on our similarities, and less on our differences.” He also hopes to make Porchfest as an annual occurrence, he said.

redbankgreen stopped in at all 22 venues. Here’s some of what we saw; click photos to enlarge.

END_OF_DOCUMENT_TOKEN_TO_BE_REPLACED

An interactive map for the event displays the lineup of acts at each location; click on circled numbers to view. Below, Carlotta Schmidt is among the scheduled artists. (Photo from YouTube. Click to enlarge.)

It was not that long ago that Red Bank was a place of large-scale, outdoor music festivals. One needn’t be ancient to recall the sprawling, weekend-long Jersey Shore Jazz & Blues Festival in Marine Park each summer, or the spring-and-fall festivals in the White Street parking lot, both of which went dark this year.

But this Sunday, live, open-air concerts come roaring back to the borough in a new, decentralized model that’s been road-tested elsewhere: Porchfest, a five-hour eargasm of 70 acts spread across town on 21 residential porches, plus 11 more acts at a previously scheduled music fest behind a dentist’s office.