An interactive map for the event displays the lineup of acts at each location; click on circled numbers to view. Below, Carlotta Schmidt is among the scheduled artists. (Photo from YouTube. Click to enlarge.)

It was not that long ago that Red Bank was a place of large-scale, outdoor music festivals. One needn’t be ancient to recall the sprawling, weekend-long Jersey Shore Jazz & Blues Festival in Marine Park each summer, or the spring-and-fall festivals in the White Street parking lot, both of which went dark this year.

But this Sunday, live, open-air concerts come roaring back to the borough in a new, decentralized model that’s been road-tested elsewhere: Porchfest, a five-hour eargasm of 70 acts spread across town on 21 residential porches, plus 11 more acts at a previously scheduled music fest behind a dentist’s office. 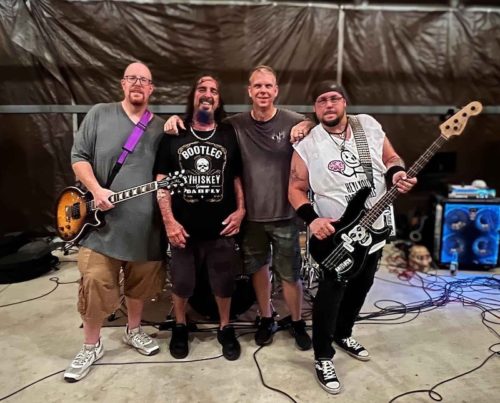 Acts as diverse as the heavy metal band Lunatic Chair, above, and songwriter Jim Crawford, below, are in the lineup of more than 70 performers. (Click to enlarge.) “This brings together so many elements that are foundational for Red Bank: the arts, residential involvement, a sense of community and participation, and actual face-to-face interactions,” Portman told redbankgreen in an email this week. “I love the fact that this happens right in our neighborhoods.”

Modeled on Asbury Park’s Porchfest, which has been running for six years, and others around America, this one was suggested by Quinn, who asked him to help pull it together, said Portman. “I was an instant ‘yes,'” he said.

Quinn did not respond to a redbankgreen email.

Portman said he and Quinn had no trouble getting homeowners to volunteer their porches. Some put together their own schedules, and “others were open to having whoever play.” Lining up acts was also not difficult, he said.

Here’s what to expect at Porchfest, which runs from noon. to 5 p.m.:

• Two members of the party band So Watt, in which Portman is a co-lead singer, are scheduled to play on his porch, at 90 John Street (map location 9), but without him.

“I’ll be running around making sure things go smoothly,” he told redbankgreen. “Hopefully I can hop up for a song or two.”

Also on the wraparound Victorian porch/stage are Zeke Moffitt and the Late Juliets, a band that includes another South Street resident, Jeff MacPherson.

“The idea of having five different bands play at our home is amazing,” Oldoerp said in an email. “Jeff asked us if we were interested a while back, and it was a no-brainer.”

• At 52 and 53 West Sunset Avenue (15 and 14), festival-goers will get to hear concerts from two porches across the street from one another, alternating each hour. Swivel chairs recommended?

• The T. Thomas Fortune Cultural Center will host a porch concert by Latin-music band Xol Azul from 4 to 5:30 p.m.

• Because it was washed out by last weekend’s rain, Zeik Dental Jam, behind the Maple Avenue offices of dentist George Zeik (22), has been rescheduled to coincide with Porchfest, and will feature 11 acts over five hours.

• Looks like there’s little chance of a washout for this one. The weather forecast for Sunday is Porchfest-perfect: sunny, with temperatures peaking in the mid-60s, according to the National Weather Service.

• Bring a lawn chair or beach blanket and water. No booze, please: Portman says this is an alcohol-free event. 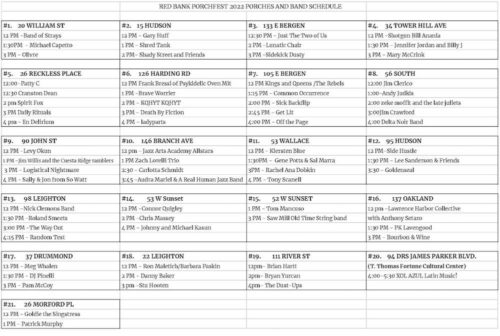