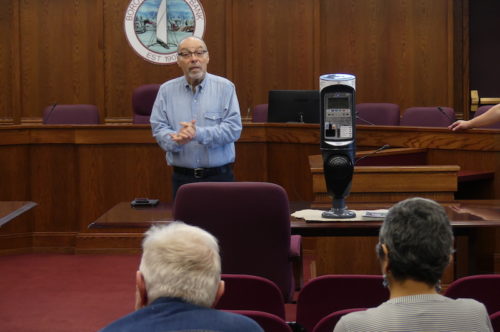 Red Bank’s entire inventory of parking meters and kiosks is slated for replacement, borough officials said Wednesday, as they debuted a ‘smart’ meter scheduled for rollout curbside early next year.

Meantime, the search for a parking director, the foremost recommendation of a parking study released in January, has been “disappointing,” the official leading the search told redbankgreen. 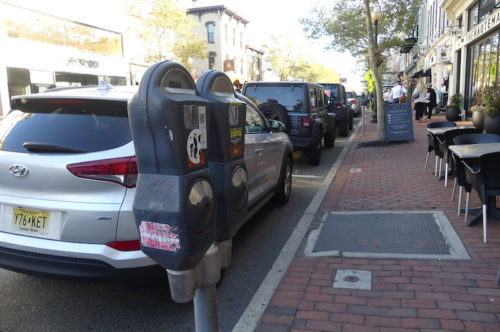 At a presentation attended by fewer than a dozen people unaffiliated with local government, officials showed off a solar-powered smart meter they said would be used for all 452 metered on-street parking spaces in town.

The MK Beacon meters are manufactured by Mackay Meters.

In most cases, the single-head meters will serve two parking spots, equating to roughly 251 meters, “give or take 20” to account for driveway interruptions and other factors, said interim parking Tom Calu.

Borough Business Administrator Ziad Shehady said the purchase would be covered by a bond up for consideration by the council in coming weeks. Repayment would be covered entirely by parking utility revenue, he said.

No change in the current parking rates — $1 per hour off-street, and $1.50 per hour at curbside, from 9 a.m. to 6 p.m., six days a week — is currently planned, though Shehady said Calu is doing a study of what other towns do in terms of pricing, hours and more.

Shehady told the audience that officials looked into using kiosks instead of meters on the street, but concluded they would cause too much inconvenience for motorists.

Replacing the “obsolete” coin meters was among the recommendations of a $52,350 parking study conducted by New York City-based Walker Consultants, the cost of which was split by the borough and Red Bank RiverCenter, which manages the special improvement district.

Separately, the borough is planning to replace the payment kiosks in the newly made-over English Plaza parking lot before the end of the current year.

At the council’s workshop session last Wednesday, Calu recommended a switch from a pay-by-space system to a pay-by-plate system, which offers “a much more effective way to offer parking, to both vend it and to enforce it,” he said.

The existing kiosks, which were installed in 2012, “are in need of upgrades that must be done,” he said. Those include 4G wireless capability, to replace the 3G service being discontinued by telecom provider Verizon after this year, and light bars to make the kiosks more visible, Calu said.

Retrofitting the existing five machines would cost about $25,000, versus $50,000 for new ones, which will come with two-year warranties on parts and software, Calu said. “So we’ll basically be getting five new machines for $25,000, net-net, after two years,” he said.

The existing machines in English Plaza were “almost destroyed” in the recent streetscape makeover, Calu said, and are “not in a condition” to be re-installed, he said.

Kiosks will also replace the coin-operated meters still used in the East Side lots sometime next year, under the same bond ordinance to be used for the street meters, said Shehady.

Meantime, Calu, a parking consultant, told redbankgreen that the hunt for a director was not going as expected.

The Walker report, unveiled in January, recommended the director “be hired immediately,” and be given authority as “the only individual charged with parking decision-making in Red Bank.”

It appears that “people in the field are well-situated” in their current jobs, Calu said.

Shehady said the borough is looking at an alternative to a full-time position, and may employ a part-timer or use consultants on an as-needed basis.

Calu said he is not a candidate for a full-time job, and is uncertain he wants a part-time job.