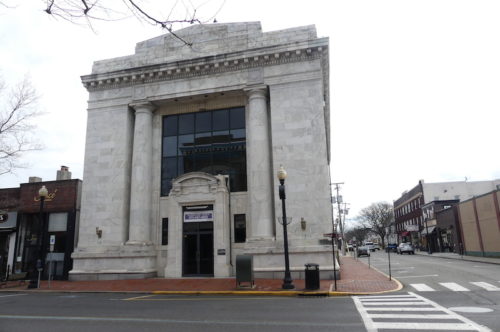 After seven years of vacancy, the former Smith Barney building at 55 Broad Street in Red Bank had apparently just landed a new tenant. And then: COVID-19. A sneak peek through the glass front door in 2017, after the interior was taken down to the brickwork. (Photos by John T. Ward. Click to enlarge.)

Early this month, Saxum Real Estate obtained approval from the borough planning office for a “change in tenancy” on the building’s first floor to accommodate an unidentified financial services firm.

The historic structure, built in 1914 as the home of the Red Bank Trust Company, has been vacant since since 2012, when tenant Morgan Stanley Smith Barney consolidated its local employees in buildings at Broad and Linden Place.

The new tenant, also in the securities field, would occupy the 5,500-square-foot first floor with “25+” employees, according to the filing by Saxum leasing director Matt Wassel.

The exterior of the structure would remain untouched, Wassel wrote. The interior, now stripped down to the brick walls, would be renovated to “accommodate multiple tenants” on each of its three floors, he wrote.

The plan was approved without need for hearings March 9, a day on which COVID-19 began erupting in America.

Now, with the American economy in near-lockdown amid the global coronavirus epidemic, will the planned renovations and tenancy go ahead as planned?

“Happy to share information with you when the lease is complete,” Wassel told redbankgreen by email Tuesday.

Saxum also owns the building that’s home to the Urban Outfitters store at Broad Street and West Front Street, and has borough approval to build 210 apartments on the site of the former VNA headquarters at Riverside Avenue and Bodman Place.