Saxum relocated the proposed  pedestrian plaza shown in this rendering from the Riverside Avenue side of the project to the Bodman Place side. (Rendering by MVMK Architecture. Photo by John T. Ward. Click to enlarge.)

One of the largest development projects in Red Bank history won planning board approval Monday night.

The OK for 210 apartments at Riverside Avenue and Bodman Place requires developer Saxum Real Estate to seek state approval for a traffic light there. But the project can go ahead even if the request fails. 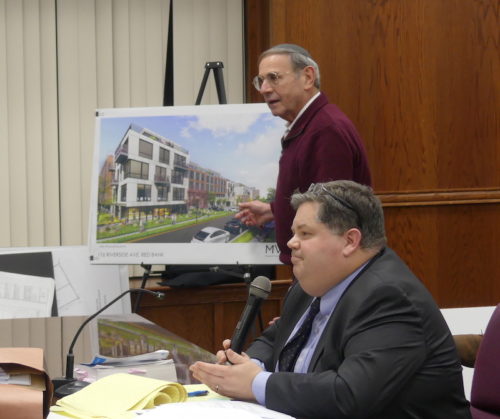 Colony House principal Charles Silberberg addresses the board as Saxum attorney Chad Warnken listens. Below, a detail of the revised plan for a pedestrian plaza. (Photos by John T. Ward. Click to enlarge.)

Neighbors, most of them living on Bodman Place, had objected to the scale of the project, which they said would worsen traffic issues, particularly for motorists attempting to exit onto Riverside.

Charles Silberberg, a principal in the firm that owns the Colony House apartment building on Bodman, complained that a promised illustration showing a detailed view of that side of the structure had never been provided, a contention disputed by Saxum attorney Chard Warnken.

One neighbor told the board after its 8-1 vote that it had “sold out” the existing residents.

Without comment, board member Lou DiMento cast the sole ‘no’ vote; he had previously criticized the plans’s environmental features, including the absence of solar power. Former Councilwoman Juanita Lewis abstained, telling redbankgreen afterward that she “wasn’t sold either way” on the proposal.

The approval followed a plan change submitted in October and aired for the first time Monday night. Responding to concerns expressed by board members and neighbors about pedestrian safety, landscape architect Dave Lustberg said Saxum would not build an outdoor seating area on the Riverside Avenue side of the property. Instead, it would be created on the Bodman Place side, he said.

The Riverside Avenue space will now be filled with landscaping, but no seating,  he said.

Warnken said the project conformed with the redevelopment agreement reached between the borough and Saxum last December. Neighbors said they had not known about the deal until Saxum filed its project application earlier this year.

Mayor Pasquale Menna made the motion to approve the project, and after the approval, said it offered “the largest, single most positive improvement in terms of providing affordable housing” in memory.

It would, he said, give people who otherwise might never afford it “the opportunity to live, work and play on” the Navesink River, which is just yards away from the site.

Saxum’s plan, he said, also offers “good design” at the northernmost entry to Red Bank, which he said is now “plagued by abandoned sites,” a reference to two vacant gas stations at Bridge Avenue and Riverside.

The project will take almost two years to build, once the existing 38,000-square-foot office building is demolished, Warnken told the board.

In the meantime, Saxum agreed to foot 80 percent of the cost of a borough application to the New Jersey Department of Transportation for construction of a traffic signal at the intersection.

The DOT, however, has shot down borough requests for a light in the past, saying  the intersection is too close to lights to the north and south on Riverside, which doubles as Route 35.

The borough approval of Saxum’s project, however, is not contingent on DOT approval.

And here are the architectural drawings, prior to subsequent revisions: 176 Riverside Ave Architecturals