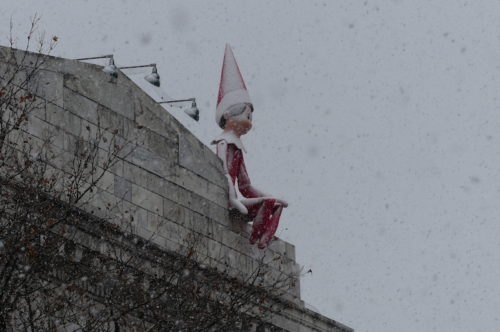 Recently returned for its second visit, a giant inflatable elf was in its native element as snow fell on downtown Red Bank Monday.

The 12-foot-tall Santa’s helper is perched atop the vacant former bank building at 55 Broad Street, owned by developer Saxum Real Estate. During the holiday season, the elf will “mysteriously move” among Saxum’s properties around New Jersey, the firm said in a press release.

On Tuesday, the elf will get to watch the two or three inches of accumulated snow melt away, as sunshine returns and temperatures peak in the low 40s, according to the National Weather Service. Check out the extended forecast below. (Photos by John T. Ward.  Click to enlarge.)