But he’s working from home and hasn’t experienced any symptoms worse than a common cold, he said. Shehady with his dog, Sheeba, at a 2018 Dog Days event in 2018. Below, Shehady disclosed the diagnosis on Facebook. (Photo by John T. Ward. Click to enlarge.) 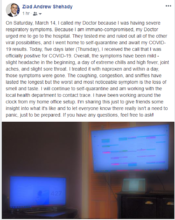 Shehady, 35, said he has been self-quarantined and working from home in Springfield, Union County, since Saturday, when he first felt symptoms that he likened to a common cold, including a stuffy head and runny nose.

In a post on a personal Facebook page Thursday, Shehady said he later began having “severe respiratory symptoms.” Because he has a pre-existing compromised immune system, he contacted his physician, who urged him to go to a hospital.

At Overlook Medical Center in Summit, Shehady said, the emergency room medical staff, after ruling out other viruses, “seemed skeptical” that he needed testing for the coronavirus, “but I was somewhat forceful because of my condition,” and the COVID-19 test was administered.

The positive results came back Thursday morning, he said.

He said he notified his friends on Facebook and was speaking out “because I felt it was important at this time of panic and hysteria to put a face on” the disease, while also letting others know that the symptoms can be mild, depending on the patient.

Governor Phil Murphy said at a press briefing in Trenton that the number of cases rose to 742, up from 427 Wednesday, including 11 additional cases in Monmouth County, to 43. One of the additional four deaths reported Thursday was in the county, officials said.

Shehady said he has been symptom-free and working from home since Sunday. As of Thursday morning, before the disclosure, Shehady was still replying to emails from redbankgreen about borough business.

“The worst part is that I still can’t smell or taste anything,” he said.

In addition to Red Bank officials, he said he had informed his local health officer in Union County, as well as Monmouth County Regional Health Commission officer Dave Henry, he said.

A reconstruction of his movements over the three days prior to the onset of his illness shows a “minimal” number of people with whom he had interactions in which he was within six feet of another person for more than a few minutes, Shehady said.

That information was shared with his local health officer and with Henry, he said.

Shehady said he had asked the Red Bank public utilities department to conduct an extra cleaning of areas he had recently visited at borough hall.

Shehady said he “has no idea at this point” when he will return to borough hall. He said that while guidelines suggested self-quarantining for three days beyond the presence of symptoms, his doctor recommended seven days.

Shehady, a former a mayor and councilmember in Springfield, was appointed as Red Bank’s business administrator in April, 2018.