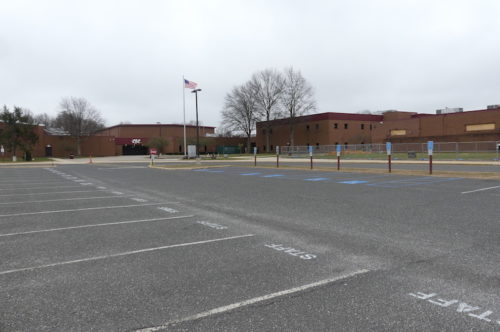 Red Bank Regional became the first school in New Jersey to close when it shut down for a “deep cleaning” March 10. (Photo by John T. Ward. Click to enlarge.) Moore says RBR community should not “let fear get the better of us.” (Photo by John T. Ward. Click to enlarge.)

In a letter sent to members of the 1,400-student school community Wednesday evening, Superintendent Lou Moore and Principal Julius said the unidentified staff member reported his or her condition to the district in the afternoon.

“At the present time, we are not sure how the staff member contracted the virus,” Moore and Clark wrote, “but do know the staff member began feeling symptoms on March 9. We can confirm that the staff member was not a direct teacher of the student who tested positive for COVID-19 and did not come into the building since the school was closed on Tuesday, March 10.”

The letter says the Monmouth County Regional Health Commission “might be reaching out to students as they proceed with their investigation of those who had direct contact with the staff member.”

Those with symptoms should contact their primary care physicians, the letter advises.

“We know this news will understandably raise additional concerns, but it’s important not to let fear get the better of us,” Moore and Clark wrote. “As a school and community, we have responded to the outbreak with courage, common sense and calm heads. We will continue to work together, take care of each other, and draw upon our many strengths as we work through the crisis.”

On March 10, RBR became the first school in the state to shut down in an effort to help slow the transmission of the COVID-19 contagion after a student, later identified as senior Liva Helt, 17, came down with symptoms.

Her 27-year-old brother, Emil Helt, already had the virus and was self-quarantined at the family home in Little Silver.

Neither sibling feels seriously ill , they told the Asbury Park Press in an interview published Monday.

The regional health commission said in a March 11 announcement that its Communicable Disease Team was investigating the student’s “close contacts” – defined as prolonged exposure within six feet of a presumed virus carrier – “which would have only occurred on March 6, 2020.”

Governor Phil Murphy earlier this week ordered the closure of all schools in the state and imposed a wide range of restrictions aimed at reducing social clustering and thus slowing the transmission of the COVID-19 virus.

On Wednesday, his administration announced the state had 427 confirmed cases, up 162 from Tuesday, including eight additional cases in Monmouth County, which had 32. Five deaths have been reported in the contagion, which the World Health Organization has classified as a global pandemic.