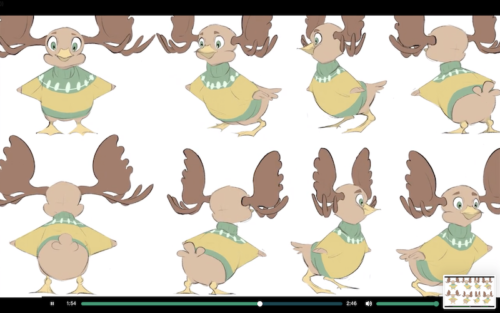 Hot off the heels of his award-winning short “Three Sonnets,” Red Bank filmmaker Jeffrey Delano Davis launched a Kickstarter campaign for a short piece of animation for children called “The Mooseduck.”

The short tells the story of Maurice the Mooseduck’s valiant effort to board a school bus despite his massive antlers. It’s a funny, touching story about feeling torn between two identities, and the struggle Maurice’s peers face as they try to accommodate him. The campaign met half of its funding goal in 24 hours. Kickstarter’s “Long Story Short” initiative features the project.

“We’ve been thrilled with the early success of the campaign,” Mr. Davis said. “The project was inspired by my daily walks with my five-year-old daughter Vera to her bus stop. The school children come from all walks of life, and they work to include one another. It inspired me. I wrote ‘The Mooseduck’ with the children of Red Bank in mind.”

Jeffrey has built a partnership with students at the University of Southern California School of Animation and the Rhode Island School of Design. “Our lead character designer Shutianyi Li has done an incredible job with the initial designs,” said Mr. Davis. “This project feels like it has wings.”

You can visit “The Mooseduck” Kickstarter page, view project perks, and donate here.