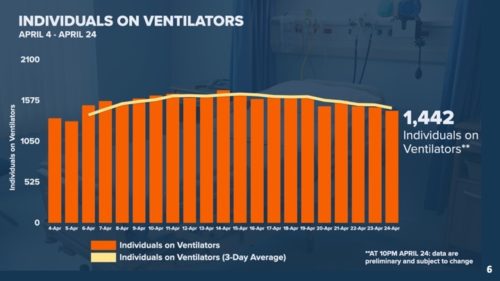 A crushing need for ventilators envisioned earlier this month under a possible worst-case scenario has not occurred, and demand has begun to ease, officials said. (Source: COVID19.nj.gov. Click to enlarge.)

New Jersey officials disclosed another day of encouraging data in the war on COVID-19 Saturday.

“It wasn’t that long ago that we were talking about a worst-case scenario” of some 36,000 residents needing hospitalization in a short time frame, swamping the healthcare system, Governor Phil Murphy said said at his daily briefing on the pandemic.

Instead, the number of patients hospitalized has been trending downward, and stands at less than one-fifth the worst imagined, administration officials said.

But as he has throughout the crisis, though, Murphy said social distancing measures must still be observed, despite the onset of pleasant spring weather.

“If we let our hair down right now, we’d probably see it,” he said of the dire forecast.

They included 14 more in Monmouth County, where the death toll stands at 287, the site showed.

Locally, that included 51 cases and 6 deaths at the Hackensack Meridian at Red Bank nursing facility (formerly Chapin Hill, on Chapin Avenue); and 11 cases and 4 deaths of residents at Red Bank’s Atrium at Navesink Harbor, on Riverside Avenue. The dates of the deaths were not disclosed.

In addition, state Health Commissioner Judy Persichilli said new patients are appearing “at a time where the hospitals can intervene at earlier stage of their disease.”

The once steeply rising curve of new cases appears to have been flattened, “which is exactly what we wanted it to do to be able to handle the capacity through our hospitals,” Persichilli said.

She said the administration officials “expect to be seeing cases through May.”

Murphy said that the briefing planned for Monday, he intends to lay out the “broad parameters” under which an end to the near lockdowns of society he ordered starting March 21 might begin to be lifted.

Meantime, “we cannot let a beautiful spring day like this allow us to slip in any way on our social distancing,” Murphy said. “We have to keep at it.”