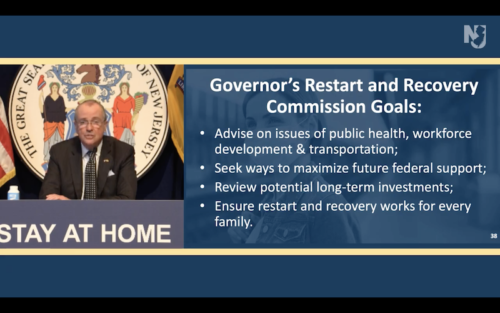 Governor Phil Murphy spent much of his daily briefing on the COVID-19 crisis Tuesday talking about ways to emerge from it and restart the New Jersey economy.

Still, he steered clear of setting dates, and appointed a 21-member commission to advise him on the matter.

At his daily briefing on the pandemic, Murphy reported another 402 deaths associated with COVID-19. As expected, the figure included an unspecified number of deaths that occurred over the weekend, and brought the state’s total to 6,442.

According to the state health department’s COVID-19 online database, 3 more Monmouth County residents died from the disease, for a total of 305.

At the same time, Monmouth County’s total number of patients testing positive for the illness rose by just 28, the smallest increase since mid-March.

Pressed by reporters on whether he might reopen state parks and golf courses, or allow clothing and craft stores to operate under the same restrictions as food stores and other businesses considered essential, Murphy said his administration “is looking at” the issue.

Still, he noted that data shows the heavy impacts of COVID-19 on healthcare systems migrating from north to south through the state, and said state residents must continue to socially-distance from one another to halt it.

“We have not arrived in any end zone,” Murphy said. “I can’t attach a date to any of it.”

• Murphy named the members of the Governor’s Restart and Recovery Commission to advise him on an eventual reopening of the state’s economy. Co-chaired by Merck CEO Ken Frazier and Princeton University president emerita Shirley Tilghman, the commission also includes former Federal Reserve Board chairman Ben Bernanke.

The commission’s “opening remit is a blank sheet of paper,” Murphy said. “We’ll go from there.”

• Murphy signed an executive order allowing municipalities to extend, to June 1, the grace period for quarterly property tax payments due May 1.

Under existing law, towns may only allow for a grace period of up to 10 days after the property tax deadline without interest or penalty.

• Asked to comment on protestors equating his March 21 lockdown order and other restrictions on social and economic activity with fascism, Murphy said, “this notion of fascism is ridiculous. We’re trying to save lives.”

On Tuesday, Fair Haven police Chief Joe McGovern, who heads the borough’s Office of Emergency Management, reported 14 “active cases” in town. In the borough’s newsletter, McGovern said the town had experienced 22 positive cases over the past six weeks, with 8 patients now recovered.