Members of the public arriving for an RBR budget hearing in March, 2019. (Photo by John T. Ward. Click to enlarge.)

Red Bank Regional High, the first school in New Jersey to shut down over concerns about COVID-19, plans to hold a live, in-person board of ed meeting Wednesday night. 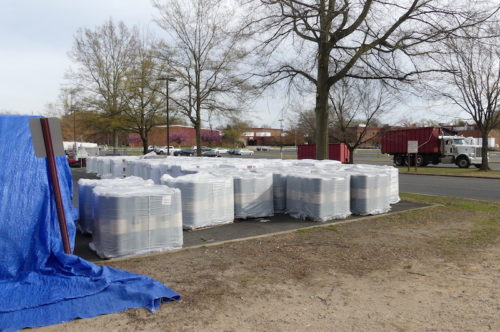 Materials lined up for use on the new roof being installed at Red Bank Regional last week. (Photo by John T. Ward. Click to enlarge.)

“This is an in-person meeting, not virtual,” said an email sent to the school community Tuesday by the Buc Backer Foundation. “The Board of Education will be accommodating arrangements for social distancing at the on-site meeting. Please come prepared with a mask.”

Superintendent Lou Moore did not immediately respond to questions about the rationale for the in-person meeting emailed to him by redbankgreen Tuesday night.

School board attorney Antony Sciarrillo and board member Frank Neary, who heads the finance committee, also could not be reached for immediate comment Tuesday night. Their responses, if any are received, will be added to this post.

Moore closed the school for a “deep cleaning of the building” March 10 after the adult brother of a student from Little Silver tested positive for COVID-19. It has not reopened since, though construction work on an addition and roof replacement has continued.

For more than a month, New Jersey has been in virtual economic and social lockdown, with all schools closed, under a series of orders issued by Governor Phil Murphy.

Throughout the crisis, Murphy has consistently called for state residents to “stay home” in order to slow the transmission of the coronavirus that causes COVID-19, which as of Tuesday was associated with the deaths of 6,442 residents, his administration reported.

Murphy’s “stay home” order of March 21, which remains in effect, allows residents to leave their homes for specific purposes, such as buying food and performing jobs considered “essential.” But it makes no explicit exception for government or school board meetings.

To the contrary, the order directs “the members of the governing body and every official, employee, or agent of every political subdivision in this State and of each member of all other governmental bodies, agencies, and authorities in this State of any nature whatsoever, to cooperate fully in all matters concerning this Executive Order.”

Municipalities across the state have canceled many public meetings while conducting others online, via Zoom, Facebook Live and other apps. Among them are the councils in Little Silver and Red Bank, two of RBR’s three sending districts.

Murphy also imposed an 8 p.m. curfew March 16 to limit non-essential travel, a restriction attendees of the RBR meeting would likely be forced to violate.

Attendees are asked to park in the administration building parking lot and enter via door number 17, on the rear patio.