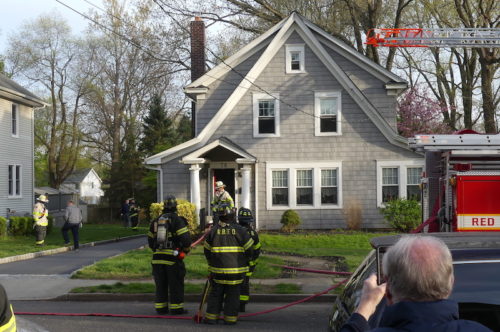 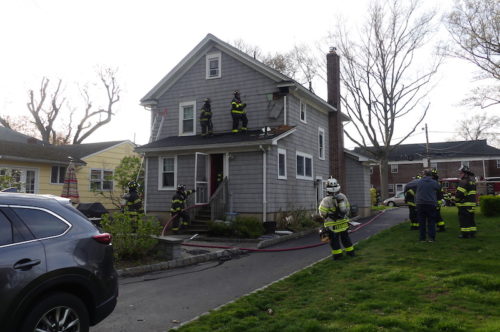 Firefighters opened a corner of the attic to access the fire. (Photos by John T. Ward. Click to enlarge.)

Volunteer firefighters responding to the 5:57 p.m. alarm quickly knocked down a blaze that appeared to have traveled from the basement to the attic between studs in the balloon-wall structure.

Firefighters remained on scene at 7 p.m., and an official account of the fire was not immediately available. It appeared, however, to be related to pipe-soldering work underway in the basement earlier in the afternoon.

The house belongs to Jeff and Tracey Merton, who with their two children were expected to be displaced for at least the night as a result of smoke and water damage.

Twitter
Posted on April 20, 2020 at 7:15 pm, filed under Featured, Fire, RED BANK and tagged 78 madison avenue, Fire, nj, red bank. Bookmark the permalink. Follow any comments here with the RSS feed for this post. Trackbacks are closed, but you can post a comment. Email this story.
PREVIOUS: VIRUS UPDATE: CARE FACILITY DATA RELEASED NEXT: RED BANK: GETTING FED, AND HELPING TO FEED