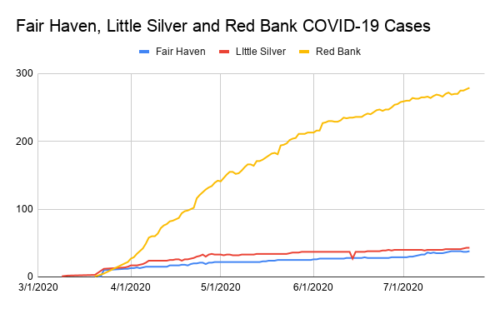 But four months into the pandemic, the county’s caseload and fatalities have slowed dramatically from the worst of the crisis in early April. 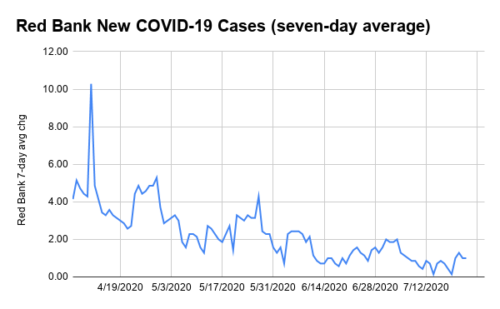 • The freeholders announced that the confirmed case total stood at 10,008 Thursday, a one-day increase of 37, with 751 fatalities associated with the virus, up 1 from Wednesday.

• Though the figures do not reflect deaths on the date of occurrence, reports of which may be delayed by weeks, only two of Monmouth’s daily updates in the past  month have reported 5 or more fatalities.

By contrast, daily reports of 10 or more deaths were routine in late March and early April.

• As of Thursday, 277 cases among Red Bank residents had been recorded, according to county data.

The seven-day average of new cases in  the borough has inched back up to 1 in recent days, after two weeks below that level.

• On Thursday, Fair Haven police Chief Joe McGovern reported 5 “active” cases in the borough, out of 38 reported over the past 19 weeks. Comparable figures have not been reported by Little Silver and Red Bank.

• Here are the cumulative Monmouth County totals by town:

• Statewide, the confirmed death toll stood at 13,810 Thursday, plus 1,910 classified as “probable,” according to the state Health Department’s online database.

The confirmed number of state residents who have tested positive since the crisis began rose by 242 from Wednesday, to 177,887.