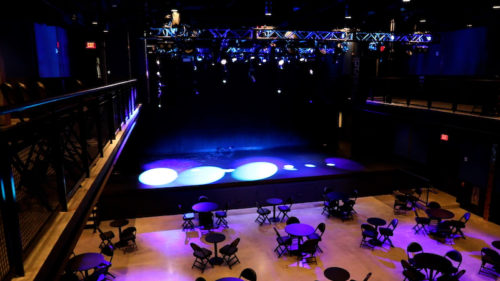 After seven months in darkness, the Count Basie Center for the Arts plans to snap the lights back on in October.

The Red Bank venue announced Tuesday that it will again host indoor performances with the opening of The Vogel, seating audiences of up to 150 in a new space built for up to 800. 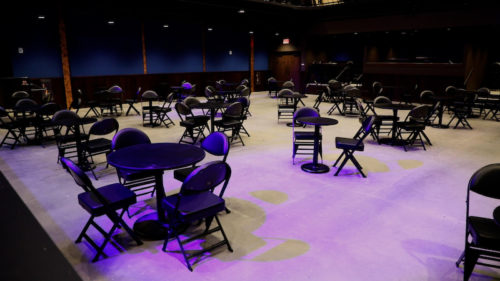 Tables with seating for groups of two to six will be spaced to comply with social distancing mandates, the Basie said. Below, new signage for The Vogel on Monmouth Street as seen Monday. (Photo below by  John T. Ward. Click to enlarge.)

The Vogel was built as part of a $25 million makeover and expansion of the original Count Basie Theatre. The project was aimed at creating a live-arts “campus” that now spans most of a block of Monmouth Street, Basie president and CEO Adam Philipson has said.

After a “summer’s worth of experience hosting safe and socially distanced concert events for more than 30,000 patrons” at Monmouth Park racetrack in Oceanport, the Basie is prepared to safely host showgoers indoors, Philipson said.

The Vogel will operate with strict social distancing measures in place, including sales of tickets in groups of two, four and six only; temperature checks and touchless ticket-taking at the door; tables spaced no less than six feet apart; and table-side sales of drinks and snacks to obviate the need for long lines at the bar.

A lineup of the The Vogel’s first acts will be announced shortly, the theater said.

The venue sorely needs the cash flow from the shows to supplement a drive launched last week to bring in $2 million in donation, Philipson acknowledged.

“The opening allows the beleaguered Basie an opportunity to create revenue as it crawls from the hardships of a seven-month closure due to the pandemic,” he said.

“Though our summer events were successful, they represent just a fraction of our financial reality,” he said. “We need to generate income to stay afloat, and we need to fulfill our mission to ‘Inspire, Educate and Entertain.'”

Originally set to open in June as the first piece of a the expansion to come online, the space is named for Sheldon Vogel, a former Atlantic Records executive, and his wife, Anne Vogel, in recognition of their support.

Though limited to seated, socially distanced events for the immediate future, The Vogel was built to accommodate both standing and seated audiences, with the goal of hosting “everything from cabaret-style jazz performances to up-and-coming artists and comedians,” according to the announcement.

The space will also host performances by students from the Basie Center Academy and the Monmouth Conservatory of Music.

Despite its financial constraints, the Basie earlier this month announced a plan to take over the lease of the former Bow Tie Cinemas venue on White Street for screening films and other movie-related events.

Philipson told redbankgreen that theater officials are confident the venture “can be successful with limited occupancy assuming people feel safe to come out” for moviegoing as worries about the pandemic ease.

Posted on September 29, 2020 at 11:30 am, filed under Art, Entertainment, Featured, Music, Night Life, Philanthropy, RED BANK and tagged anne vogel, count basie center for the arts, nj, red bank, sheldon vogel, the vogel. Bookmark the permalink. Follow any comments here with the RSS feed for this post. Trackbacks are closed, but you can post a comment. Email this story.
PREVIOUS: LITTLE SILVER: COVID PROMPTS RBR CLOSURE NEXT: LITTLE SILVER: RBR AIMS FOR THURSDAY