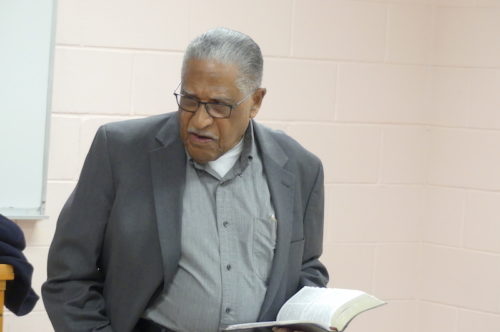 Davis at a meeting of the Greater Red Bank NAACP, which he headed, in February, 2019.  (Photo by John T. Ward. Click to enlarge.)

Menna said he had directed that flags at borough facilities be lowered to half staff until the day of Davis’s funeral “in recognition for his decades long service to the Red Bank community.”

“Red Bank lost a wise, spirited, unflappable Man of God,” Menna wrote. “Rev. Davis was a parter in the struggle for equality and to  eradicate systemic racism his entire life.

“A man of immeasurable faith, he joyfully expressed the Gospel Message in civic action that brought all people to the cause. He was a teacher of goodness and embraced  the unity of people of goodness, acting together with respect for each other as the solution to the problems of our time.”

“How much he has meant, to so many, is immeasurable,” Pastor Terrence Porter, of Pilgrim Baptist Church, said in an email announcing Davis’s death.

An obituary can be found here.

A walk-through public viewing is scheduled for Friday, September 11, from 1 p.m. to 9 p.m., at St. Paul Baptist Church  in Atlantic Highlands, with a family-only “homegoing celebration” scheduled for Saturday.