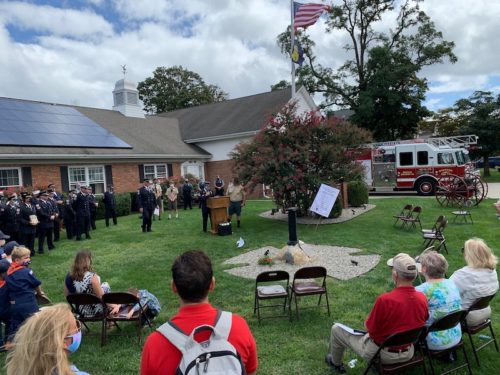 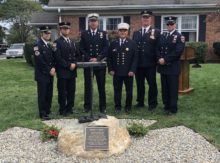 A 147-pound piece of steel beam from the destroyed World Trade Center was unveiled as the centerpiece of a 9-11 Memorial in Rumson on September 12.

The monument, consisting of what’s identified as “Artifact # I-0004z,” was created by the Rumson Fire Company with the help of borough Boy Scout Griffin Volk for his Eagle Scout project.

In remarks at the ceremony, fire department Lieutenant Paul Halligan noted that of the 2,606 people who died at the World Trade Center in the September 11, 2001 attack, eight were EMTs/paramedics; 71 were law enforcement officers; and 343 were firefighters.

“Many more since that day have succumbed to 9/11 related illnesses,” he said.

In the days following the attacks, the Rumson Fire Company raised more than $40,000 that went directly to Widows and  Children’s Fund of the FDNY.

Griffin, a junior at Rumson-Fair Haven Regional High, said he chose the project “because I knew it was something that would have a significant impact on the community, and serve as a reminder of all those firefighters that lost their lives.”

He said he looks forward to one day bringing his own children to the memorial and “telling them of the heroic action the firefighters took on that day.”