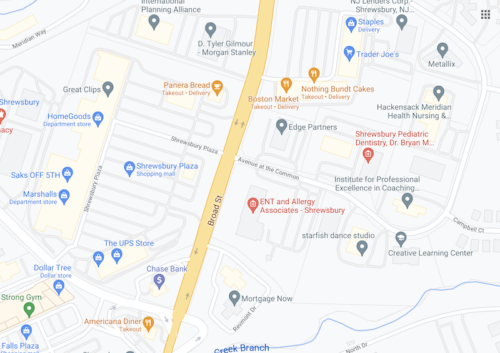 The accident occurred on Route 35 near the Avenue at the Common, the prosecutor’s office said. (Google Maps. Click to enlarge.)

The incident occurred at about 6:15 p.m., when borough police responded to a collision involving a pedestrian and a single motor vehicle just north of Avenue at the Common, Prosecutor Christopher J. Gramiccioni said in the prepared statement.

Upon arrival, officers discovered that a female driver of a 2018 Honda Civic was driving in the southbound lanes of State Highway 35 when the vehicle struck Tamar Carseladze, 69, of Shrewsbury, who was attempting to cross State Highway 35 outside of a marked crosswalk at the time of the collision.

Carseladze was taken to a local hospital where he was later pronounced deceased at 6:55 p.m.

The driver was taken to the hospital for a non-life threatening injury and was later released.

No summonses were issued.

Anyone who witnessed the crash or has information to assist the investigative team is urged to contact Monmouth County Prosecutor’s Office Detective Ryan McAndrews at 800-533-7443, or Shrewsbury Police Department Detective Jim Ramsey at 732-741-2500.

Posted on December 9, 2020 at 11:07 am, filed under Accidents, Featured, Government, Law & Justice, SHREWSBURY, walking & running and tagged accident, nj, pedestrian fatailities, Shrewsbury, Tamar Carseladze. Bookmark the permalink. Follow any comments here with the RSS feed for this post. Trackbacks are closed, but you can post a comment. Email this story.
PREVIOUS: RED BANK: A TOUCH OF WINTER IN THE AIR NEXT: RED BANK: FRICTION OVER WEST FRONT PLAN