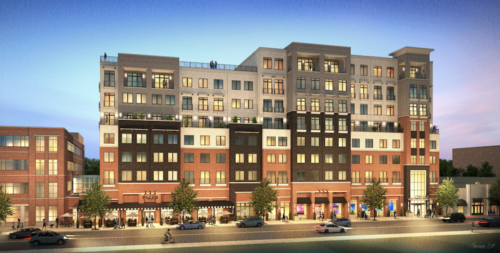 A proposed development that would dramatically alter a downtown Red Bank block won’t have a significant impact on traffic, a developer’s consultant told the zoning board Wednesday night.

The hearing prompted some friction between the developer’s representatives and a board member, who warned them to “be careful” if they wanted his vote.

A  rendering of the Wall Street side of the proposed project; the existing office building and rear entrance to Pazzo are grayed-out. Below, board members listening to testimony via Zoom. (Rendering by Feinberg & Associates; photo by John T. Ward. Click to enlarge.)

The board held a special meeting to resume a hearing begun in January. and interrupted by the COVID-10 pandemic.

On the table: a proposal by PRC Group to add seven stories of parking and apartments atop Pazzo MMX restaurant, at 141 West Front Street, between West and Pearl streets.

PRC, which relocated its headquarters from West Long Branch to an office building at the Red Bank site, had amended its original request, filed 13 months ago. Instead of 150 apartments, it is now seeking 137; it has also reduced the height of the nine-story structure by three feet, to 122, in a zone where the limit is 40 feet.

With fewer units than originally proposed, the project would now create a density of 52 residential units per acre, down from 56.7, where the zone maximum is 16 per acre, according to PRC’s filings.

And instead of a full approval, it is now asking for a host of use variances and other waivers of zoning restrictions, including height.

If the variances are granted, the company would return at a future date for approval of detailed site plans, attorney Peter Wersinger told the board.

Longtime board member Sean Murphy asked that Lange also state whether the addresses he was using as comparisons are in the same zone as the proposed project, for the benefit of the public watching via Zoom.

After encountering what he interpreted as resistance from Wersinger, Murphy said: “I’m asking – actually, I’m not asking you anymore, I’m telling you: if you want my vote, you need to explain, when you compare Grandview Towers, which is in a different zoning, to Pazzo, you need to explain it clearly.

“Your heights are double if not triple” the borough’s limits for the site, he said, “so I’d be careful the water you tread.”

Later, traffic engineer Maurice Rached, also of Maser Consulting, summarized a traffic and parking analysis that he said showed “no significant impact” on rush-hour delays for motorists at the four corners bounding the block.

He also testified that, while borough ordinance suggests the project would come up 211 parking spaces short of what’s required, “in real life,” the plan’s 554 spaces would constitute a “surplus” of 90 spots.

The hearing reached the 9 p.m. cut-off time enforced by Chairwoman Lauren Nicosia before the public could question Rached about his testimony, and is scheduled to resume at a regular session February 4. As per custom, public comment is not taken until the applicant has completed its presentation.