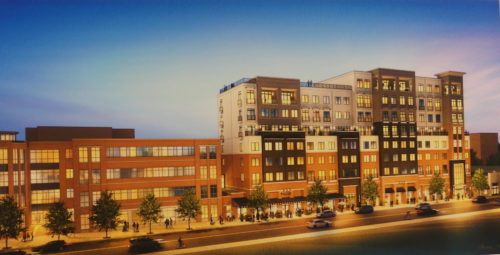 An architect’s rendering showing the West Front Street side of the proposed project, with the existing office building at left. (Rendering by Feinberg & Associates. Click to enlarge.)

A plan to build 150 apartments atop an existing restaurant and parking deck in downtown Red Bank got its first taste of public scrutiny Thursday night.

While descriptions of the project by an engineer and an architect for developer PRC Group took up most of the three-hour zoning board hearing, it became clear that the plan’s scale, and impact on traffic, are likely to be issues.

END_OF_DOCUMENT_TOKEN_TO_BE_REPLACED

A proposal to add 150 apartments to the Red Bank Corporate Plaza complex on West Front Street is scheduled to go before the borough zoning board Thursday night.

As previously reported by redbankgreen, the project would shatter the borough’s limits on building height, density and more if approved.

Here’s what you need to know about the application. (Rendering by Feinberg & Associates. Click to enlarge.)

END_OF_DOCUMENT_TOKEN_TO_BE_REPLACED 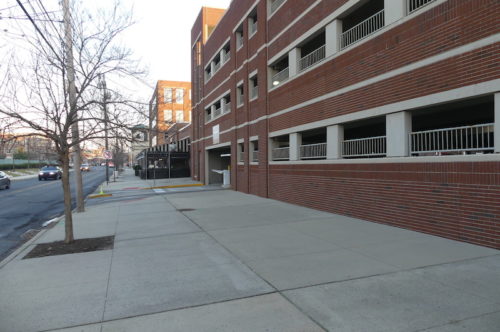 END_OF_DOCUMENT_TOKEN_TO_BE_REPLACED

A ‘WHITE ELEPHANT’ NO MORE Four months ago, when redbankgreen first reported on the impending pizza renaissance in Red Bank, we described the slated location of one of those pie joints, Pazzos Coal Fired Oven Restaurant, as a nearly-empty “white elephant.”

Boy, did we get an earful. Suzanne Macnow, who brokers the leases for  Red Bank Corporate Plaza at 141 West Front Street, took issue with the characterization, citing actual occupancy, signed leases and others that were nearing signature.

Whether our terminology was apt then was a matter of disagreement. No more. Today, we’re eating our words as if they were served atop an airy, coal-fired pizza crust.