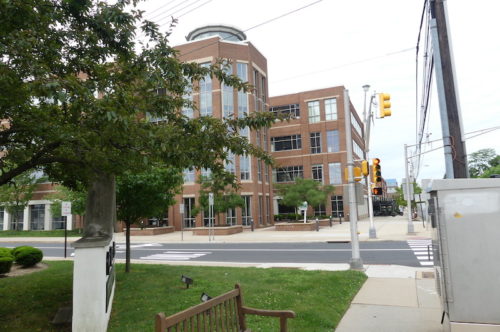 The latest plan calls for additions at 141 West Front Street to top out at six stories. (Photo by John T. Ward. Click to enlarge.)

EDITOR’ NOTE: This is a repost of an article from January 18. The January 20 zoning board hearing on this plan was cancelled and is now scheduled for Thursday, March 3.

More than two years after it was first proposed, a massive addition to an existing building in downtown Red Bank keeps getting less massive.

With the third round of revisions made in the hope of satisfying the zoning board this week, PRC Group has reduced its ask to 58 residential units, down from the original 150, and from 99 last summer.

The plan, calling for additions above Pazzo MMX restaurant that would bring the existing structure to six stories, is slated to be heard by the board Thursday night.

Six of the proposed 58 living units would qualify as affordable housing, with three others to be created at another, unspecified location, according to architect William Feinberg.

The building would top out at 78 feet in height, after a series of revisions from the originally proposed 122 feet.

According to a PRC exhibit, that compares to 158 feet for Navesink Riverside Residences and 155 for the Atrium at Navesink Harbor, both on Riverside Avenue just steps away from the PRC site.

Still, the zoning for 141 West Front limits buildings to 40 feet.

PRC’s project was first proposed late 2019, and the company has twice paused board hearings to revise plans in the face of board opposition. The last hearing was in June, 2021.

The meeting, scheduled for 6:30 p.m., will be conducted via Zoom. Here’s the agenda, with links to key documents.