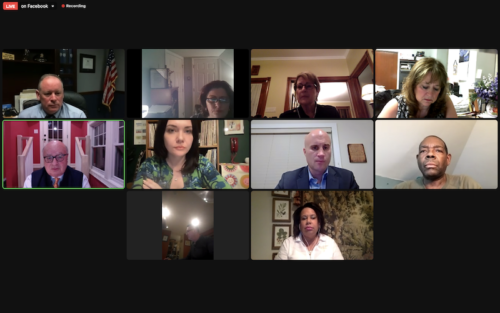 Angela Mirandi, in second pane from left in the top row, attended her first session as a council member. (Photo by John T. Ward. Click to enlarge.)

As in the past, members clashed over the reasons for the time elapsed and cost. Added to the acrimony was a new element: blame for failure to identify money recently found sitting idle in old accounts and now earmarked for repairs.

Unmentioned during the virtual meeting was a lawsuit, announced hours earlier, that seeks to remove Angela Mirandi, who attended for the first time as a council member.

By a 5-to-0 vote, the council appropriated $1.94 million for repairs to the single-story senior recreation building on Shrewsbury Avenue, with $870,00 to be funded by new debt.

The balance would be covered by cash left over from completed capital projects, as well as money set aside for “projects that were contemplated in the past, but have not come to fruition,” interim Business Administrator Darren McConnell said recently.

As redbankgreen reported Tuesday, the largest portion of the $1 million in dormant accounts was $196,667, the balance remaining on a sum believed to have been designated for a boat ramp in the early 1990s. The ramp was never built.

While praising themselves and interim CFO Bob Swisher for having “cobbled together” the funds, and thus obviating the need for even more debt, Councilman Ed Zipprich and Councilman Michael Ballard used the vote as an opportunity to revisit an issue that’s divided the all-Democratic council for months: whether the repairs could have been made long ago, if not for their opponents.

“You never persuaded the prior BA [business administrator] to release or utilize the boat ramp funds” for the repairs, said Zipprich, who was elected to the governing body in 2009. “Those types of funding sources were available” for use by “prior councils,” he said.

Menna, who was elected to the council in 1990, replied that he was “not on council when the boat ramp was approved.” In addition, he said, “since time immemorial, a succession” of borough attorneys, CFOs, auditors and administrators told elected officials that the money was reserved “exclusively for a boat ramp.”

“Now, I’m happy to see that somebody had a change of heart, administratively and legally,” Menna said. But former administrator Stanley Sickels said “repeatedly, that that money is sacrosanct, like a trust fund, and can only be used for another boat ramp,” Menna said.

“I just want the record to be clear that I have only served under one mayor, and that’s you,” and none of the other officials named by Menna “were on the dais when I was elected in 2008,” Zipprich said.

He did not elaborate on why he viewed it as the duty of the mayor, rather than the council, to redirect the funds.

Annual audit statements going back at least a decade and posted on the borough website identified the funds as earmarked for a boat ramp, despite a lack of movement toward building a ramp.

Ballard, a second-term member and former finance committee chairman who has been a stalwart Zipprich ally, has announced his intention to challenge Menna for the Democratic nomination to run for mayor in November.

Councilwoman Kate Triggiano noted that both Zipprich and Ballard voted, twice, along with the rest of the council, to reject bids for repairing the fire suppression system alone at those costs in late 2019.

After those bid votes, the issue was then shifted, over Ballard’s objection, to the Redevelopment Agency, on which Zipprich sat as a member, Triggiano said. In the meantime, the borough was “looking into what would be covered by insurance” and also contending with the COVID-19 pandemic, which began in March, 2020, derailing meetings, she said.

The planned repairs now also include improvements that go well beyond merely replacing the fire suppression system, she said.

“So to say that, back then, we should have done something differently, when all of us voted to reject that bid, all of us, is false,” she said.

Ballard and Zipprich both defended their 2019 bid votes as having been based on “faulty” estimates from professionals.

“You always talk about the two rejected bids,” Ballard told Triggiano. “But we never followed up. Then we started kicking the can down the road. And that’s when the [Redevelopment Agency] and the $8 million building came in that had nothing to do with repairing the Senior Center. So please when you recant [sic] that history, please include the fact that we never tried to fix the building at the cost that it was.”

Unmentioned during the virtual meeting was a lawsuit, announced hours earlier, that seeks to remove Angela Mirandi, who attended for the first time as a council member.

Mirandi abstained on the financing vote because, “as much as I want to see our seniors back to the center as soon as possible… I feel I haven’t been able to do my due diligence in getting my head wrapped around this $1.9 million price tag,” she said.

“It’s not like we just found a dollar in our pocketbook,” said Cedar Avenue resident Sue Viscomi. “It was a significant amount of money.”

Viscomi said she was glad the funds were found, “but it’s weird that it’s ‘found.’ It shouldn’t be.” The council, she said, needs to be more proactive about monitoring project balances.

“I don’t think anyone is complaining” that council found the funds, said Branch Avenue resident Stephen Hecht. “The issue is that we didn’t in fact know about it. And that’s where I’d like to see you pay attention,” he said, suggesting the council receive a quarterly or annual report.

• Menna appointed Mirandi, a corporate accountant, to chair the council’s finance committee, on which Horgan and Triggiano are members.

Mirandi reported she had met earlier in the day with Swisher and one of his colleagues to “get up to speed” on finance operations and the development of this year’s budget, which she said could be available in a preliminary form by mid-March.

• The council approved the installation of a memorial bench and marker at Count Basie Park in honor of Michelle Brown, a Rumson resident who died November 11 after a long battle with breast cancer.

Her son, senior Red Bank Catholic quarterback Alex Brown, stunned the sports world one day after her death, passing for six touchdowns and running for two more on the stadium’s football field in a 58-34 playoff win over Morris Catholic.

Michelle Brown was “a huge proponent” of the team, said Alison Zenker, an Oceanport resident involved in the memorial effort. The bench and plaque would be paid for by donors, she said.

Ballard abstained from the vote, citing his continued objections to a memorial policy. “No disrespect to the Brown family; my heart goes out to them,” he said.

Mirandi agreed the policy needs some “tightening” to remove “subjectivity,” but voted in favor of the resolution.

• The council introduced a cannabis licensing ordinance, with an adoption voted scheduled for March 9.

•  The council appointed Matt Berdahl, of Highland Avenue, and Angela Courtney, of Tower Hill Drive, to vacant seat on the Historic Preservation Commission. It also created two alternate-member seats on the Animal Welfare Advisory Committee. [CORRECTION: The original version of this post erroneously reported that Berdahl and Courtney were appointed to the animal committee.]

• Councilwoman Jacqueline Sturdivant said she planned to meet Thursday with members of the borough’s information technology operation to discuss, among other topics, the creation of a hybrid meeting system to allow simultaneous in-person and remote participation at council meetings.

Menna said he hoped the council’s March 9 session would be in-person, the first such meeting in two years.