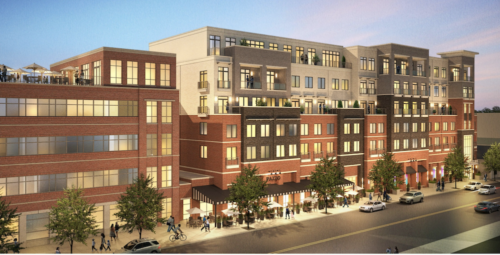 The latest proposal for 141 West Front Street includes a restaurant atop the existing office building, at left, and stepped-back apartments and parking with faux windows above the existing Pazzo MMX restaurant. (Rendering by Feinberg & Associates. Click to enlarge.)

PRC Group will have to wait at least two more months for a zoning board decision on its proposed makeover of a prominent Red Bank property.

At the latest hearing on the plan Thursday night, board members continued to challenge the scale of the project, even after two rounds of shrinkage. 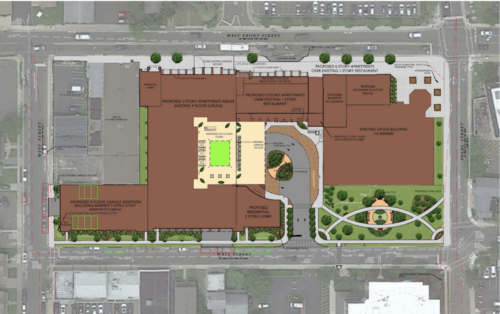 The latest plan calls for fifth-floor tenants’ plaza with a green area above a vehicular traffic loop off Wall Street. (Rendering by Feinberg & Associates. Click to enlarge.)

Board member Richard Angowski, noting a height reduction of 30 feet from the last version, pressed PRC planning consultant Christine Nazzaro Cofone to justify what would now be a 92-foot-tall structure that’s “still 52 feet above what’s permitted in the zone.”

Cofone cited an exhibit showing the heights of other buildings nearby, ranging from 75 feet to 138 feet. They include Riverview Towers (recently renamed Navesink Riverside Residences and Marina) on Riverside Avenue; Grandville Towers, on Allen Street; and the Colony House apartments, on Bodman Place.

“We are certainly in no way the tallest structure” in the area, she said. “You have much taller buildings across the street.”

But as other board members had at prior hearings, Angowski noted that none of those buildings is in the same zone as 141 West Front Street.

“I don’t find that exhibit compelling, and in my quasi-judicial capacity, I’d like to disregard that exhibit,” Angowski said.

Cofone responded that would be “unfairly prejudicial” to PRC, leading to a tense exchange.

The original version of PRC’s proposal called for adding 150 apartments and multiple parking levels to the nearly block-long complex known as Red Bank Corporate Plaza. It includes the single-story home of Pazzo MMX restaurant, nestled between a four-story office building and parking garage.

A revision cut that down to 137 apartments and seven stories. But on the brink of apparent rejection in Februuary, PRC obtained a four-month reprieve in order to consider additional changes.

Under the pending proposal, 99 apartments and a rooftop restaurant with outdoor seating would be built.

“It’s dramatically changed based on input from the board and the public,” said architect William Feinberg.

Board Chairwoman Lauren Nicosia expressed concern that eight of the project’s affordable units would be undersized according to borough standards.

• PRC Engineer Jeromie Lange spoke about the benefits of putting apartments and a flat roof atop what’s now exposed garage parking. The change would eliminate hydrocarbon runoff from entering the stormwater system, he said.

• Parking consultant Maurice Rached said the latest revisions would reduce the number of vehicle movements in and out of the site, as compared to earlier proposals, which he had previously testified would not be significant.

• Bob Marchese, an attorney representing property owners on West Street, again questioned Rached about the combined impact of the PRC plan and other development underway or recently completed in the area.

He cited a recent expansion of the parking lot at the Two River Theater, which now connects with West Street, and a conversion of the office building at 170 Monmouth Street, along with the addition of new apartments at that site.

The hearing was tentatively scheduled to resume August 5. A full set of documents filed on the proposal can be found here.