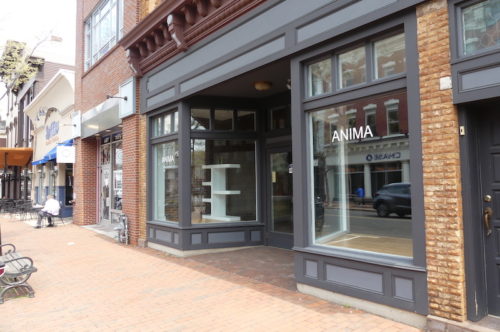 The former Anima space at 37 Broad is getting a new tenant, while the facade of the now-vacant storefront next door (at left) is getting a makeover. (Photo by John T. Ward. Click to enlarge)

Epoxy-and-wood tables; “occult” bath products; and news about two downtown restaurants get the spotlight in this edition of redbankgreen‘s Retail Churn. 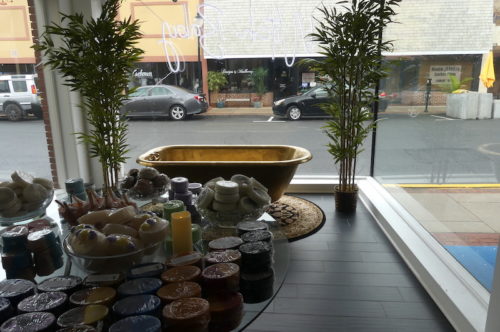 Olena Prykhodko, president of the company’s American branch, tells Churn this will be its first in the United States, joining showrooms in the Ukraine and England. The store should be open by the end of June, she said.

The space, in a building christened as the “Temple of Fashion” when it was built in 1894, was last occupied by Anima boutique.

• John Anderson, whose family owns 37 Broad, also owns the vacant building next door, which he tells us will be getting a facade makeover and interior renovations, though no tenant is yet signed.

The space is the former home of Jay and Silent Bob’s Secret Stash, which relocated earlier this year to 65 Broad Street.

As reported by Churn in April, the shop bills itself as a seller of “occult bath and beauty products for people who want to get naked and do witchcraft.”

And if they want to do it in the shop’s window, a gold bathtub stands ready to accommodate them. Not actual, precious metal gold, like some people’s bathtubs, but spray-painted and no doubt just as good.

Owner Chelsea Randazza created Witch Baby Soap in Cranford in 2013, so this is her second store.

Witch Baby shares a building, and vestibule, with Feet First skate shop, which opened in February.

The occasion coincided with a general return to indoor dining for enclosed restaurants after 14 months of takeout due to the COVID-19 pandemic.

During the six-week closure, Doherty and Betts continued to serve their vegan clientele from Karma 2 Go, their lunch-oriented takeout place on Edmund Wilson Boulevard, opposite the entrance to the Two River Theater.

Until last year, the building had ben home to the Front Street Trattoria for 35 years. Through RBRE Holdings LLC, Hodzic and Battaglia acquired the property in February for $1.18 million.