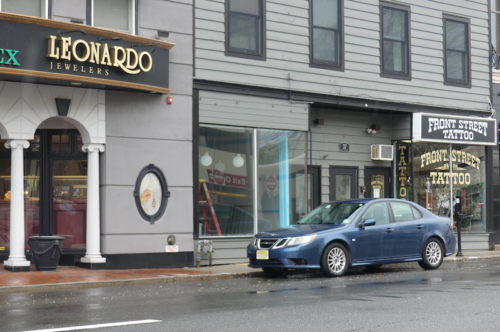 An established, and local, wholesale cookie baker is making the move to storefront retail in Red Bank as soon as next week.

Also in the works downtown: an ‘occult’ soap shop, a tattoo parlor and a ‘golf lounge.’ Read all about ’em this edition of redbankgreen‘s Retail Churn. 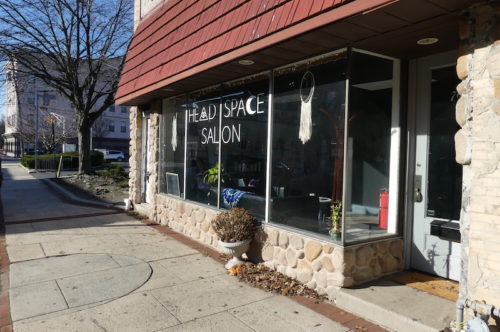 • Claire Theodore, a Fair Haven resident who’s been selling cookies through Sickles Market in Little Silver and local Acme and ShopRite stores for the past five years, is making the move to brick-and-mortar.

She plans to open Sweet Bee Bakeshop at 37  East Front Street as soon as next week, depending on final inspections.

“Our incomparable cookie dough is made from fresh butter — not hydrogenated oils or substitutes — Guittard chocolate that’s all natural and made in the U.S., real vanilla and eggs,” says a description on the shop’s website. “Our cookies have a soft center, crisp edges and are decadent and comforting.”

Theodore tells Churn she plans to initially open on a limited schedule, maintaining the flow of cookies to her wholesale customers, as well as local customers who special-order directly from her.

She’ll also deliver gift baskets to patients and workers at Riverview Medical Center, which is practically next door, while providing curbside fulfillment of orders for boxed cookies, frozen dough and more to retail customers.

“Eventually, we’ll get into more of a regular retail store operation” as pandemic restrictions ease, she said.

The space was occupied by another baked-treatery: Sugarush, a cupcake shop that closed its doors in February, moving in the opposite direction, from storefront to catering.

The store is Chelsea Randazza’s second: she opened Witch Baby Soap in Cranford in 2013, according to the business website.

Witch Baby Soap bills itself as a purveyor of “occult bath and beauty products for people who want to get naked and do witchcraft” – and really, who doesn’t?

I was born in Red Bank. I used to sneak on the train to go there when I was 13 to hang out with my punk friends at Marine Park, bought some of my favorite albums at @jacksmusicshop, saw my friends bands play at Chubby’s and the Internet Cafe, scraped together money to buy clothes at Funk & Standard, and made soooo so many more memories there. Thirteen year old me is positively SCREAMING.

The opening date is to be determined, Randazza wrote.

The space is in the same building as the newly opened Feet First skate shop, with which it shares a vestibule.

• The Golf Den, a “modern, upscale indoor golf lounge… powered by TrackMan technology,” plans to open at 8 East Front Street, according to a post on Facebook.

The space was previously occupied by Renaissance Pilates, which relocated to 23-25 West Front Street in late 2019. Golf Den has new signage teed up for review by the Historic Preservation Commission next Wednesday night.

• House of Fades plans to move a few doors west to 18 Monmouth Street, according to a filing with the borough. Robinson Hernandez opened the shop at 8 Monmouth in 2012.

The new space was last home to Paint-A-Tee.

• Just a few doors east of Head Space, Immortal Ink Tattoo Studio plans to take over vacant space at 70-72 Monmouth Street, according to a filing with the borough planning office.

A representative of the business, which has stores in Asbury Park and Hunterdon County, could not immediately be reached for comment.

The retail space was previously home to Janice Brown’s Nearly New used clothing shop, which closed last June after 27 years of operation there.

Immortal Ink would be the second tat shop to open since the borough loosened zoning restrictions in 2018, following Front Street Tattoo (located next door to Sweet Bee Bakeshop, as seen in the photo at the top of this post).

• Good Karma Café‘s main restaurant at 17 East Front Street is temporarily closed for renovations, according to a recent post on Facebook.

In the interim, the vegan favorite is operating out of its Karma 2 Go storefront on Edmund Wilson Boulevard, opposite the entrance to the Two River Theater.